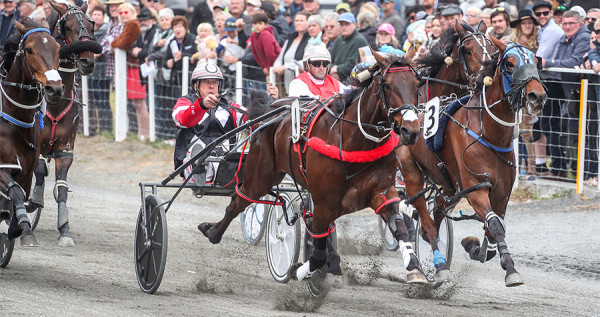 The 2019 champion stepped to the lead in the 2400 metre feature and despite the challenges held on by half a length from Check In and Ashley Locaz in 2:58.20.

It was driver John Dunn’s third win in the race following on from his success last year and Franco Nelson in 2016.

For Classie Brigade, who was third in last year’s New Zealand Cup, it was his fourth win in five starts, and that had Robert Dunn feeling buoyant ahead of the year’s biggest race in a week.

“He’s a big chance in the Cup, but you look at Self Assured, Spankem and Copy That – I’ve always liked that horse - they are quality horses and it’s not a four way go by any means. But I loved the way my horse stepped and toughed it out.”

Dunn now hoping for a front line draw for the $540,000 Cup so the horse can try and dictate like he did at the South Bay Racecourse.

He was in the one-one and looked likely when Matua Tana broke in front of him, taking him out of the race.

“John (driver) said he was just cruising at the time,” says Dunn.

In a long career Dunn (senior) has seen plenty of highs and lows and was trying to be philosophical, though clearly he was still thinking about what could have been.

"But what can you do?” said Dunn who is now eyeing up trotting's biggest race, the Dominion, on Show Day.

“He is a creature of habit this horse, and if he’d broken up by himself you’d be concerned but he didn’t. He’s absolutely flying. So all you can do is move on.”

In Dunn’s case it’s all about moving on to the New Zealand Cup draw on Wednesday hoping luck will go his way.

With Sundees Son out of commission Majestic Lavros was the one to benefit. The Mark Jones-trained trotter stepped well and went to the lead and once Samantha Ottley heard from the on-course commentary that her biggest threat had broken she was confident the race was in safe keeping.

“We set him for this race so it’s very pleasing. We had to make it hard for the backmarkers. We thought if we get to the top and roll along, and he certainly did that.”

Majestic Lavros winning time was 3:00.10, a new race record. She was also the first female driver to win the Group 3 race.

In the day’s third big race, the $50,000 PGG Wrightson Sales Series Aged Classic Handicap Pace, William Wallace toughed it out in a competitive finish for driver Blair Orange and trainer Mitchell Kerr.  The horse stepped well and pressed on for the lead and then held on, with Bad To The Bone finishing second.