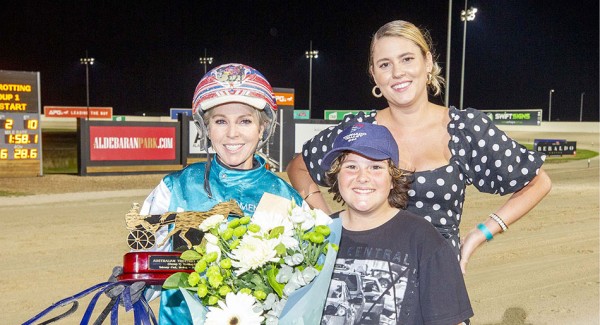 It was the campaign where the boy became a man.

It also earned him the inaugural Aurora Australis crown and a $50,000 bonus for being the top points scorer through a string of Victoria’s biggest trotting features.

Majestuoso has always possessed blinding speed and talent, but this is the campaign where he’s come the complete package. He’s won races sit-sprinting, leading and sat without cover throughout last night.

Driver Kate Gath was content to let Always Ready dictate terms in front, backing Majestuoso’s speed to get him home.

Majestuoso beat-off Always Ready rounding the home bend, but then had to stave-off a big late surge along the inside from the leader’s star stablemate, Im Ready Jet.

There was a half-head margin for Majestuoso on the line in a 1min58.1sec mile rate.

It was Majestuoso’s 25th win from just 50 starts with another 14 placings and took his career earnings past $565,000.

“He hasn’t been an easy horse to train, but all the effort and patience has been worth it,” trainer Andy Gath. “We’ve really seen it all come together, piece-by-piece, especially over the past six to nine months.

“We’re lucky we’ve got an owner like Norm (Jenkin) who not only buys these horses but doesn’t put any pressure on and lets us do what’s needed with them.”

Former Kiwi pacer Vintage Cheddar has quickly made his mark in Victoria.

The latest Kiwi import to be bought by owner Norm Jenkin and join Team Gath has won his first two runs for the stable in the space of just six days.

While he raced roughly at times to narrowly win on debut for Andy Gath at Terang, Vintage Cheddar looked a lot more comfortable doing all the work and blowing away his rivals at Ballarat last Friday night.

Much stronger races loom for the classy gelding, but the early signs are promising.

What a comeback this has been for Nathan Jack.

The outstanding horseman, who spent years on the sidelines fighting racing-related police charges he eventually beat, has only been back driving a few weeks and already jagged two Group 1 wins.

It was a win that meant the world as Jack drove the daughter of Bettors Delight for his father, Russell Jack, who held the stable together during Nathan’s off-track saga.

“This one is so special,” Jack said. “To share it with Dad after everything done for me through these really hard years … it’s very special.

“At a time of life Dad should be taking it easier, he never worked harder to keep everything going.”

Jack burned Just Hope off the gate to lead from barrier nine then sat on Madrid, knowing Amore Vita would have to come around and sit parked.

No sooner had Madrid beaten-off Amore Vita when Just Hope peeled-off her back and swept past her to win running away by 3.1m in a slick 1min54.9sec mile rate for the long 2400m trip.

It completed a unique double with Just Hope having won the Bathurst Gold Tiara last season at just her third race start.

Amore Vita was far from disgraced in third spot, just 4.1m from the winner. She drifted back to last from a wide draw, worked hard around the field midrace and kept trying hard right to the line.

Tims A Trooper, a son of Tintin In America, did plenty of work and still looked very strong on the line winning the first heat in a 1min55.7sec mile rate for 2400m.

But Leap To Fame looked even better, being crossed early, then sitting parked and clearing out to win in powerhouse style by 12.2m in a 1min55.5sec mile rate.

Both are raced by Kevin and Kay Seymour.

Champion driver Chris Lewis marked his return to driving with a massive upset win on Cordero in the free-for-all at Gloucester Park last Friday night.

Lewis had a stint on the sidelines under Western Australia’s vaccination rules, but the veteran drove a superb race to lift $101 chance Cordero to snatch a nose win over veteran champ Chicago Bull in a 1min56.4sec mile rate for the long 2536m trip.

Chicago Bull was so brave, doing all the work outside his main danger Patronus Star as they buzzed through splits of the last mile in 28.8, 28.9, 27.7 and home in 28.2sec.

While driver Gary Hall Jr couldn’t quite get Chicago Bull home, he still had a huge night, winning both Group 1 Australian Gold 2YO finals. He teamed with trainer Mike Reed for an upset with American Ideal filly Cabsav in her final, while Hall Jr won the colts and geldings final on Justin Prentice’s hot favourite Valedictorian.

The Group 2 3YO Gold finals went to Fly Like An Eagle filly Wonderful To Fly and Swingband, a son of the late Alta Christiano, won the colts and geldings’ clash.

Vacation Hill looked in control when Kate Gath was able to get her away from an inside back row draw and whiz around to take the lead.

But just as Vacation Hill was being hailed the winner, top young driver James Herbertson brought Aldebaran Crescent out of the pack to storm home and win running away by 4.7m in 1min56.5sec mile rate.