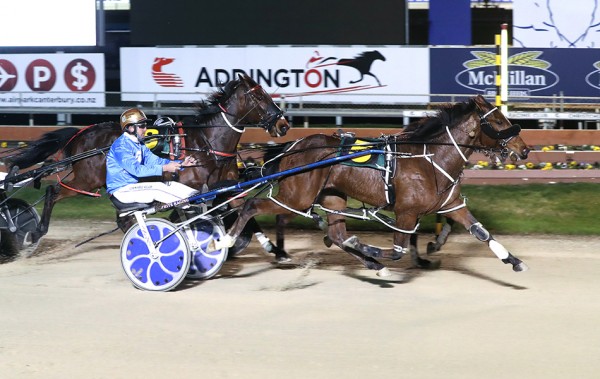 The Graeme Anderson and Mike Love-trained three-year-old utilised his blistering gate speed to take an early lead before quickly handing up to Franco Niven.

He soon found himself three back on the markers when Somekindawonderful assumed control of the race at the bell.

Turning for home driver Matthew Williamson was able to navigate American Lightning into clear air where he was able to showcase his turn of foot to chase down Franco Niven to win by a half neck.

His trainers were duly impressed with his first-up effort and are excited about the spring ahead.

“I was very pleased with that win fresh-up,” Anderson said.

“He showed a bit of gate speed, which he has always possessed, and got across to the rail.

“He followed the Dunn horses and came out wide and ran on very well in what was a good race. I was very impressed.

“We have just got to find a race for him now. We will just go race-by-race and see what comes up. I will check the calendar and see what is available for him.

“He is still only a three-year-old so there is still a bit of life left in him.”

Prior to Friday’s race, American Lightning was impressive at the trials, comfortably winning his 2500m heat, running his last half in 54.5.

“He needed a good hit-out and we had to go against a field that wasn’t much good,” Anderson said.

“He gave them a 20m head start and followed them to the half and we let him go. He needed a bit of a hit-out to go to Christchurch.”

“He went up to Brent White’s and has been there for a few days. He hoppled him during the week and he was very happy with him,” Anderson said.

“They enjoy going up there and getting looked after, so a big thanks to him as well.”

Closer to home, Anderson is looking forward to lining up stablemate Cantfindabettorman in the Plunket Electrical Oamaru Mobile Pace (2000m) at Oamaru on Sunday.

The promising juvenile will be vying for his third successive win and Anderson is confident he can do it after his fresh-up 2-1/4 length victory at Invercargill earlier this month.

“He should win, we are aiming quite high with him,” Anderson said. “It is a stronger race again but he has drawn well (3) and is a good horse, so he will be hard to beat there.”