The All Stars colours were once again to the fore at Ashburton Raceway on Sunday, including a win in the day's feature, the Group 2 Sheep Milk New Zealand Sapling Stakes.

Trainer Mark Purdon and Hayden Cullen opened their account with a quinella in the Gr.3 Helen Pope 2YO Fillies Stakes (1700m) courtesy of Millwood Nike and Tiffs Little Sister.

It was a special result for stable junior driver Olivia Thornley who recorded her third Group victory behind Millwood Nike.

“I think she is a special filly,” Thornley said.

“We didn’t get things our way out of the gate with Blair (Orange, driver of Girlshavtime) wanting to hold the lead, but she showed how tough she was and how quick she is when she outsprinted them up the straight; it was pretty special.

“I am very grateful to the owners for putting me on. It is no mean feat putting a junior on, especially in a Group race.”

With the win, the daughter of Captaintreacherous extended her unbeaten streak to two and added a timely pedigree update to her dam Albuquerque who is currently on offer in standardbred.gavelhouse.com’s latest auction.

Thornley said the promising juvenile will now get a well-deserved break.

“She will go out for a spell and get ready for the feature races later on in the year,” she said. 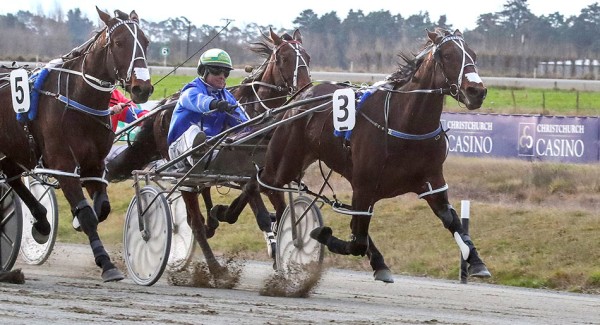 The All Stars stable furthered their Group tally when filling the top four spots in the Gr.2 Sheep Milk NZ Sapling Stakes (1700m) later on the card, led home by Vinke B.

Thornley did the steering behind placegetter With Style and was rapt with the result.

“All of those two-year-olds were very good in that race,” she said.

“The draw (7) wasn’t kind to us but he got home really well for third. I was rapt with him.”

Thornley said it was good to see the All Stars stable perform well on Sunday.

“It was a really good. We had eight horses over three races and we won two of them, and second and third in the other,” she said.

“We had a really good day and all the horses went super.”

Thornley now has nine wins to her name from 37 starts this season and nearly $150,000 in stakes earnings.

“It is my career best season for wins,” she said. “Everything is ticking along really well and I am just so grateful to the trainers and owners who have been giving me so many opportunities over the last few months.”