Akuta unlikely to race till February 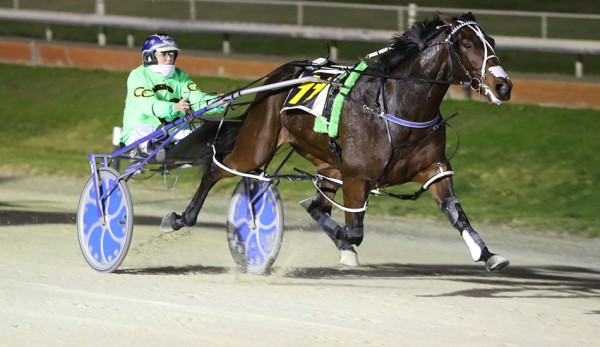 The new pin-up boy of pacing Akuta is likely to miss the rest of this year as one of the first major absentees caused by the new realignment of the racing season.

Akuta was breathtaking coming from last to obliterate his rivals by 10 lengths in the McMillan Equine Feeds at the Harness Jewels at Cambridge in June, a performance that has many anointing him as harness racing's next superstar.

That star will almost certainly not be shining at Addington on New Zealand Cup day though as Akuta is going to miss the Sires’ Stakes to be given time to prepare for a busier than usual 2022.

“He is a big horse and with the seasons changing we didn’t want to rush him back for only one big race in the next few months,” says trainer Hayden Cullen.

“We are still firming up that decision but I am sure we will give him time so you won’t be seeing him in the Sires’ Stakes unless something changes.”

Akuta was as short as $1.40 to win that Sires’ Stakes before the market was suspended on Monday and when it re-opened there were huge changes as not only does Akuta look set to miss the Sires’ Stakes but second favourite Cosmic Major, the only horse to have beaten Akuta in five starts, will also not be in the Sires’ Stakes as he suffered an injury that will put him out until next year.

That saw Willow Bay the new $4 favourite over Franco Indie at $4.50 and Major Perry at $5 in a very open market.

Akuta is the first high profile pacer to have his plans changed by the massive changes unfolding in harness racing that could see huge changes to the carnivals.

Harness Racing New Zealand have moved the official birthday of NZ-bred standardbred (harness) horses to January 1 to bring it in line with Australia and are now going through planning and workshops on what that will mean for the racing calendar but there is already one major change confirmed.

That is the new Harness Millions meeting at Alexandra Park on February 12 to highlight yearling sales week and it will now be Akuta’s first big target, a huge win for the inaugural meeting.

All the changes won’t really affect New Zealand Cup week at Addington with the iconic open class pacing and trotting races to still go ahead and as much as purists would love to see Akuta in the Sires’ Stakes his absence could convince more northern trainers to make the trip south.

The other major change being tipped for the realignment of the racing programmes is moving the Auckland Cup to May but these decisions are still to be confirmed by HRNZ and the clubs involved.