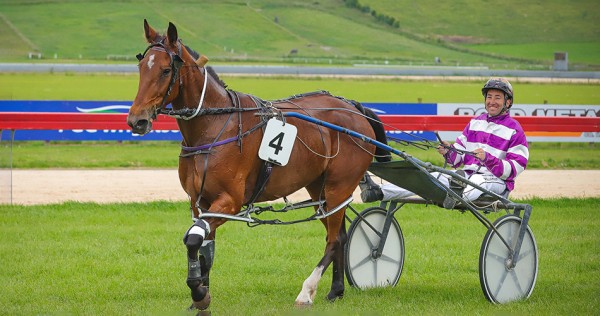 Family and friends watched on as Matthew Williamson joined the elite group of reinsmen to have won 1000 races in New Zealand when he drove Ariella to victory on the track where it all began.

A winning treble of typically confident and pinpoint steers at Oamaru put Williamson’s name alongside New Zealand’s greatest ever drivers when he became the 26th and third youngest member to join the select 1000-win club.

To do it on his home track – where his journey towards the races began with his first race drive – made an already epic moment even more special.
“That definitely made it special, the locals were all there and they were loving it,” Williamson said.

“It couldn’t have worked out any better doing it at Oamaru, it was a huge thrill.”

There have been many thrills in the career of the first Otago-based driver to have won 1000 races in New Zealand.

Victories during the World Drivers Championships in Sweden and Group One wins with
Leighton Hest, Pembrook’s Delight and Luisianabelle Midfrew head the list.

There was also a thrill of another kind during Williamson’s 1000th win.

The driver’s legions of fans were left gasping when Ariella knocked off when clear in the lead in race 10, leaving onlookers worried an epic moment might be taken away from the driver simply because his horse lost concentration.

But as he has done so many times before, Williamson had the situation well under control.

“I was thinking what is she going to do here, this isn’t ideal when you are on 999.”

“She put them away really easy and then she shut up shop, but luckily she is a classy filly and she went again.”

Williamson reached 1000 wins on three horses from blue and gold country and appropriately, two were trotters.

The reinsman went to 998 wins in New Zealand by sending Oamaru trotter Shandon Bells around the field in the middle stages which set up her victory in race 5 for trainer Chris McLeod.

Another trotting win brought up win 999 with Williamson again using positive tactics when pushing Katiki Beach trotter Count Eyre to the lead before he controlled race 8.

Count Eyre’s win took Williamson to 361 trotting wins in New Zealand with a big chunk of them coming for his parents Phil and Bev Williamson.

“A big thanks has to go to Mum and Dad for getting me started, I wouldn’t have got where I am without their support and their tutelage.”

Though Williamson has had the advantage of being able to drive in a lot more races than his contemporaries of yesteryear, the reinsman has had to drive himself every kilometre of the way to get there.

Being based in Oamaru, where he grew up and learnt his trade among an esteemed trotting family, means no flying into meetings like many Canterbury drivers do when heading to Southland each week.

It means big hours on the road, often driving himself or the Williamson’s horse transporter.

Life has only got busier for the horseman who is now training a team at Oamaru racecourse, too.

“Being in Oamaru does mean a lot of travel by road, you can’t fly anywhere.”

“But when there are opportunities you have got to go.”

“It is busy, but it is good having great staff who are helping with the stable when I am away for the day driving.”

“Barry White and his partner Teria McKay and our stable employee Brooke Fodie hold the fort down which is great.”

“Steve Allan has been great to me as well and he has been a big part of our family’s lives.”

Williamson spends all of his time when he is not training and driving with his family.

Wife Charlotte and daughters Sadie and Leila were at Oamaru earlier on Wednesday to support the reinsman before it got late in the day and the kids needed to head home.

“I wouldn’t be doing what I am doing without Charlotte’s support.”

“She is a great driver herself, but she has sacrificed that for our family.”

“It is busy, but I try to spend all of my time with her and the girls when I am not driving or working the horses.”

“Family is the most important thing in life.”

If normal transmission continues brothers Nathan and Brad Williamson will make their way into the 1000 winners club next.