Here's a trivia question. Who’s the Kiwi with the famous harness racing name who has had nearly twice as many winners as Tony Herlihy, the most successful reinsman on New Zealand soil? 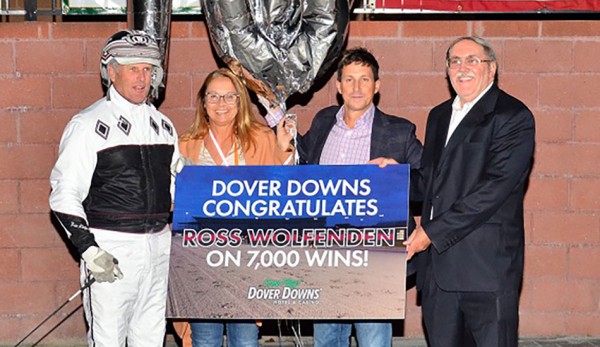 In November this year the 58-year-old become the first New Zealand-born driver to bring up 7000 wins, after basing himself in the United States for the last 30 years or so.

The expat Kiwi brought up the milestone when outsider See You Tuesday, a horse he also trains, won at Dover Downs in Delaware.

“It was a bit of a surprise,” said Wolfenden.

To put the total in context his 7000 compares with Herlihy's nearly 3600 winners.

Horses were never far away for Ross Wolfenden as he grew up, with his father Peter “Wolfie” Wolfenden one of the legends of the sport.

He won four New Zealand Cups, six Auckland Cups, and five Rowe Cups and will forever be associated with the incomparable Cardigan Bay, the first standardbred in this country to earn more than a $US1m.

Wolfie trained till 2016, the last decade in partnership with Ross’ brother Glen – himself a highly proficient horseman with more than 530 winners. Glen still drives occasionally, his last winner being Dragon Tattoo in March 2020.

Ross spoke of living up to the Wolfenden name in one interview saying : “Everyone to me is an individual. You just do the best you can.”

Wolfenden Junior was a motor mechanic by trade and after driving more than fifty winners in this country decided to head to the States because of the greater opportunities there.

He started driving in 1993, initially based around New York and New Jersey, with his most successful season (by winners) being the 405 victories he had in 2010. Overall he’s accrued stakes earnings of more $US64m. He has now had more than 51,000 drives in North America. He started training in 1997 (171 winners).

Home is a four hectare farm in Felton, Delaware not far from two of his regular haunts, Harrington Raceway and Dover Downs. He moved there 18 years ago.

Wolfenden says he still misses New Zealand and not only friends and family there but also his favourite meal - “roast lamb and all the trimmings”.

While he is the sole member of the 7000 club, fellow Kiwi Dexter Dunn is also enjoying phenomenal success in the US. The New Jersey-based Dunn has had close on 1400 winners, the vast majority coming in the past three years.