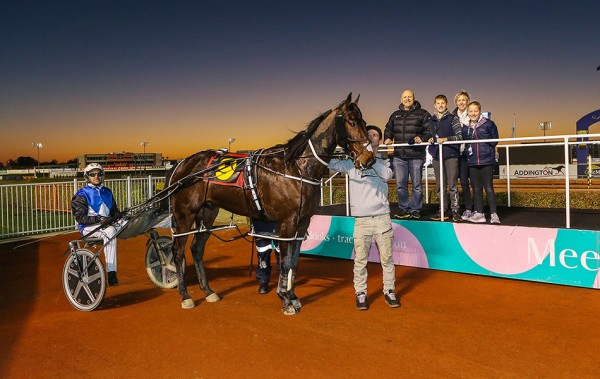 Nathan Williamson put a full stop at the end of his record-breaking season when Get Up N Dance won at Addington on Friday night.

He already held the record for most wins in a season by a Southland trainer with his tally of 42 in the 2015 season.

Williamson had also already broken his own record before his three-year-old showed his true potential and brought up his 47th win of the current season in race 1.

Addington has been an important track in Williamson’s outstanding term with his nine wins at the Canterbury track, including one of his five group race victories, among that haul of 47 victories.

“It has been really good, I obviously had two really nice horses in Pembrook Playboy and Ragazzo Mach on the pacer’s side and some really nice trotters as well,” the trainer said.

“It has been a good year, it is going to be hard to top it but you’ve just got to keep going and try again.”

Get Up N Dance put a frustrating run behind him when cruising to his easy victory.

The three-year-old looked to have at least a slice of the talent his outstanding but now retired sibling Shut Up N Dance had in his trials but he wasn’t able to show it in his prior starts for a variety of reasons.

Two starts ago the pacer was found to be under the weather after his seventh placing and in his last start he broke in the running.

Those hiccups were forgotten when Get Up N Dance powered away from his rivals before being eased up at the line by Williamson on Friday night.

“He has always had the ability there, it has just been a matter of ironing a few things out.”

“He has been staying up in Canterbury with Regan Todd and it has worked the oracle.”

“He was great tonight, so we were rapt.”

Williamson and Todd also combined to produce the scintillating Shut Up N Dance.

Williamson did the early work with the mare, bred and raced by Dayle and Kay Kiznett, before he sent her to Todd so she could be worked at Woodend Beach.

With the new Southland season about to kick off next week, Williamson will soon have the option of lining Get Up N Dance up closer to home.

But the three-year-old’s plans are up in the air.

“We will just see, I will talk to Regan about it tomorrow and then we will discuss it with the owners.”

“He is three until the end of the year so he has still got plenty of opportunities there to take advantage of.”

Williamson will have a small number of horses ready for early season racing in Southland.

Before the new term begins he will line up Millie’s Gift at Addington on Sunday.