The real Midfrew Luisianabeau left his rivals in his dust as he ran to an overdue win at Ashburton on Tuesday.

The Brent White trained pacer put a couple of frustrating performances behind him thanks to an assertive Stephen McNally drive which gave his rivals little chance of catching him in the lead.

Midfrew Luisianabeau had been racing on the southern Christmas circuit while based with Graeme Anderson and Mike Love recently before returning to trainer Brent White ahead of the Ashburton meeting.

Mistakes in his last two starts had been costly but the five-year-old showed his true worth when running his rivals ragged on Tuesday.

“He gets a wee bit silly sometimes, it was disappointing at Omakau when Sarah (O’Reilly) drove him because he could have got a free one.”

“Graeme and Mike had done a great job with him, Graeme had said to me on more than one occasion he was very happy with him and he thought he would go well, but things just hadn’t gone to plan.”

McNally executed White’s plan to perfection with Midfrew Luisianabeau proving uncatchable in the lead in race 7. 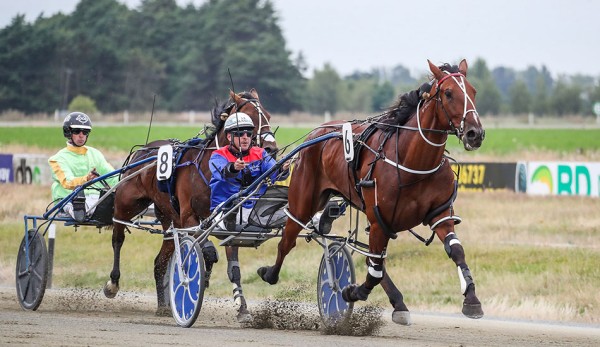 White’s attention turns to the Northern Southland Cup meeting on Wednesday where he lines up two runners.

One Apollo will be out to defend his 2021 Group Three Southern Lights Trot title.

White doesn’t expect the trotter to beat Sundees Son, but he is hoping for a strong performance.

One Apollo has been staying in the south at the Anderson-Love barn and the reports about his recent work have been very good.

“Graeme is really happy with him.”

“I know he probably can’t beat Sundees Son or Oscar Bonavena but if he was on his game like he was 12 months ago when he ran a track record off the front, they would have to work to catch him.”

The four-year-old went a big race in her last start in arguably a stronger field, running fourth after doing her share of mid-race work on a hot speed at Omakau.

“We were really happy with her run at Omakau, if she had got around them and lobbed the trail when that horse galloped she wouldn’t have been that far away (from winning).”

“What happens in the first 500-600m will determine what happens.”

“If she gets hung out wide it will be hard work, but if she can get off the gate hard she would have to be a good chance.”