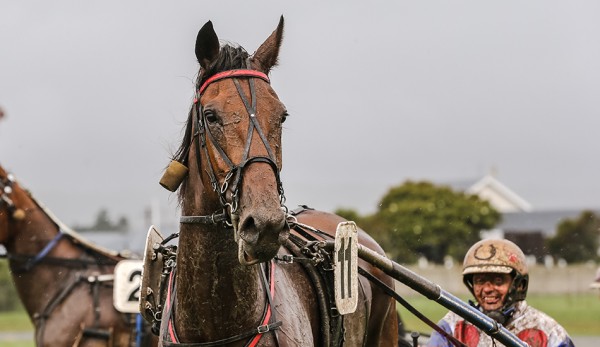 Trainer Laurence Hanrahan is hoping to finish the West Coast circuit on a high with Last Of the Mohicans when he contests the Rosco Contractors LTD Reefton Cup (3200m) on Thursday.

The son of Auckland Reactor was a beaten favourite in the Westport Cup (3200m) on Boxing Day when finishing fourth but backed up two days later to win the Caltex Westport Handicap Pace (2600m) in testing Heavy conditions.

Hanrahan was over the moon with the result but admitted the tough run and battle with Homebush Lad down the home straight has taken its toll on the gelding.

“It was pretty gutsy by both horses to fight it out like that,” Hanrahan said.

“When they went past me the other horse (Homebush Lad) had just headed him and for him to come back and get up was full credit to the horse and the drive (by Ricky May) was outstanding. You can’t beat an old head in those sort of races.

There will be a few weary legs in the Reefton Cup but Hanrahan said their biggest danger isn’t Last Of The Mohican’s 20m handicap, but Kiwi X Factor, who bypassed Tuesday’s meeting after winning the Westport Cup.

“The 20m isn’t really a concern because he has been at the back of the field on both days,” Hanrahan said.

“He will end up there again, we won’t be driving him any different. I never tell Ricky (May) how to drive him, he might be tired and he might not go at all, and if Ricky doesn’t think he is up to it then he won’t push him.

“Gavin Smith and Bob Butt scratched their one (Kiwi X Factor), so he should be on fresh legs. He has got the wood on us on that side of it.”

Last Of The Mohicans will head for a well-deserved spell after Thursday with a plan to head towards the Country Cups Final next year.

“Long term I would like to see him in that Cups Final race in April and give him the opportunity to race for $100,000, that would be great,” Hanrahan said.

Meanwhile, Hanrahan is hoping stablemate Major Arma can break through for his maiden win in the Hairplay Reefton Pace (2000m) after finishing runner-up and fourth on the first two days.

“He has had a couple of really nice runs. He begins and is just a little fella who tries and puts himself in the race,” Hanrahan said.

“We will see what happens again. There is no pressure with him, he is what he is and he will win a race one day.

“He will line-up and go away again. I think the wet track bogged him down the other day, his wee legs couldn’t go any faster.

“I thought Jimmy Curtin’s horse (Melania) went super in that race and I think she will be very hard to beat.”