Vale Ray Kennedy - the man behind all those Maguires 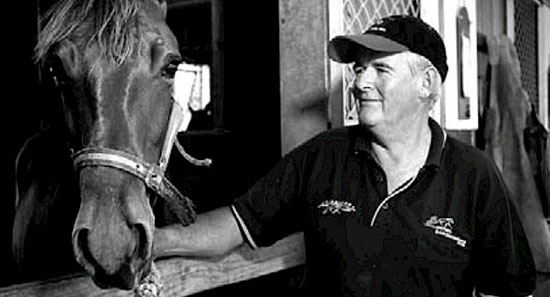 Ray Kennedy would have been cross that he didn’t make it to the yearling sales this week.

The man behind the moniker Maguire, who built Jubilee Park into a major force in standardbred breeding, died last Friday at his Cambridge home, aged 71.

Kennedy’s days of selling sale-toppers had long since passed but he had been looking forward to seeing his four latest yearlings go through the ring in Christchurch starting today.

Closest to his heart was lot 219, a filly by freshman sire Lazarus named Briar Maguire, who is one of the very last foals out of the remarkable old broodmare Unrehearsed, who helped put his name up in lights.

Unrehearsed might have won Kennedy only three races on the track but from 2006, when her first foal Lizzie Maguire fetched $60,000, she held sway in the ring, her first eight foals netting Kennedy and his wife Diana $580,000.

Kennedy topped the sale in 2006 in only his second year selling at Karaka, the colt Davey Maguire fetching an unheard of $160,000.

“He was buying more and more mares and I was saying ‘whoa’ as for a few years there was more money going out than coming in.

“We had so many horses - 25 broodmares at one stage - that we had to get a bigger property.

“I kept telling him we could make more money out of gallopers but for some reason he liked the standardbreds.”

Kennedy, born and raised in Dunedin, wasn’t always a harness man. His early forays were with thoroughbreds and he raced a number of good ones, his best the speedy grey Steely Dan, the winner of 12 races and $459,458 including the 1986 Group I 2000 Guineas, 1988 Group I Captain Cook Stakes and Peter Pan at Sandown in Melbourne.

Kennedy originally earned his punting money as a lawyer in Gisborne where he also farmed beef and sheep part-time.

“I was going mad doing that and decided I had to get out of it otherwise I would work myself to death,” Kennedy said in one interview.

The Kennedys first moved to Christchurch where they developed a property for horses in Leeston but eventually made their way north to Cambridge where the Maguire dynasty began.

Hundreds of horses bearing the brand Maguire have raced since - not many stables haven’t had at last one and Lincoln Farms raced three, the best Zach Maguire who was sold after winning five races.

It would be a rare week when race lists are missing a Maguire.

It was at Alex Park in December, 2018, that Ray had his biggest disappointment when Macey Maguire was involved in a three-horse smash and had to be put down. She was the one filly out of Unrehearsed he desperately wanted to retain for breeding, the old mare now retired at the age of 22.

“Unrehearsed got very hard to get in foal towards the end and we bred from her only every second year.

“All the foals threw to her. And the filly in the sale on Monday looks just like her - big and rangy.”

“Ray organised all the breeding and the finances, I did everything with the horses.

“There are still three mares in the South Island, with fillies at foot, but I’m back training gallopers and have a couple of jumpers ready to go this year.”

After 34 years with Ray, Di says she was used to his stubborn ways. Not afraid to speak his mind she says he often got into trouble with others - “He didn’t know when to keep his opinion to himself!”

Kennedy is survived by eight children, four from a previous marriage.