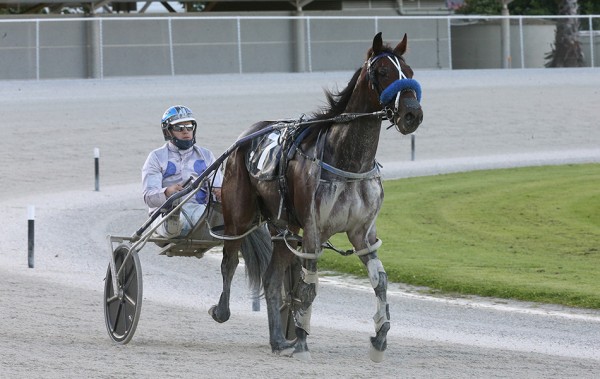 Juvenile pacer Ultimate Missile was backed into $1.40 favoritism when on debut in the Jacobsen Headstones Mobile Pace (2200m) at Alexandra Park on Friday night and duly delivered for punters.

The son of Bettor’s Delight settled off the pace for driver Scott Phelan, who trains the colt in partnership with Barry Purdon, from his wide gate.

He secured the one-one at the 600m mark, when Mercury Rising handed up to Pasquale, and from there Phelan was able to find a soft passage into the race and ran over the top of his rivals to win by a neck over Mercury Rising.

His trainers were pleased with Ultimate Missile’s first-up effort but said he still has plenty to learn.

“I think he will learn a bit out of that, he is pretty green,” Purdon said.

“I was confident he would be hard to beat, it was just lucky Scotty gave him a beautiful run. I was pleased he got up.”

Purdon has a bit of time for the colt and believes he can make his way through the grades.

“We just hope he can make the next step up now, which I am sure he will,” he said.

“We will probably line him up again in three weeks and then try to put him in some better races and try and bring him on a bit more.”

While still under COVID-19 level three restrictions in Auckland, neither Purdon or Phelan could accompany Bad To The Bone south to Canterbury this weekend ahead of Kaikoura’s transferred meeting at Addington Raceway on Sunday.

He will be looking to continue that good association on Monday when he lines-up in the Gr.2 Alabar Kaikoura Cup (2600m) where he will be driven by veteran reinsman Colin DeFilippi.

The four-year-old gelding takes a solid form line into the race, having finished runner-up in his two northern starts this preparation, and his conditioners are confident of a bold showing on Monday.

“He is as good as he can be, Jeff (Whittaker) has done a great job looking after him,” Purdon said.

“He gets his chance. He is good enough if he is in the right spot, so hopefully he can put his best foot forward.”