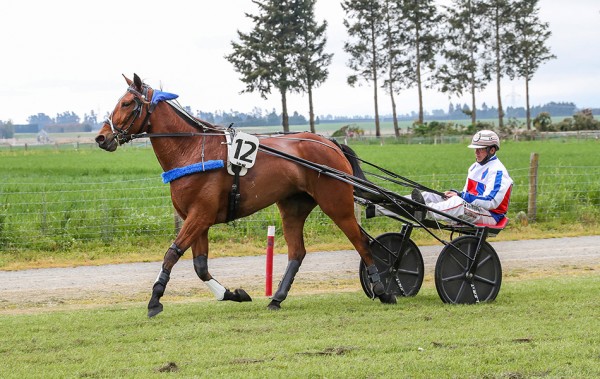 A group of mates are living the harness racing dream with Tom Bagrie and Love Rose.

The trotter broke through for her first win for driver John Dunn at Methven on Friday, suggesting she could be in for a fruitful summer.

The victory continued a winning ride that started with the trainer being supported by a group of his friends.

“A few years ago, knowing that I didn’t have a heap of money to spend at the sales, Philip Iggo told me about a horse I could lease, B D Khaosan.”

“A few of my mates from school came in on him and he did a pretty good job.”

“He ran third in the trotting derby and won on Cup day before we sold him to Aussie for quite good money.”

“Later on his sister – Love Rose – was in the yearling sales so we bought her.”

“The same guys that raced B D Khaosan came in on her and a few new people took a share as well.”

Following Friday’s win, it looks a distinct possibility that Bagrie and his mates will be living a harness racing dream from their school years.

“Hopefully we will be able to start over Cup Week now.”

“When we were younger going to Cup Day and betting on horses on Cup Day was what got these guys interested in the game.”

“So it will be pretty cool for them to now be able to have a runner.”

Love Rose returned to racing with a third at Addington before her victory at Methven.

Prior to spelling, the three-year-old showed promise in her first campaign and started in the New Zealand Trotting Oaks.

“We have always liked her, but she has been a bit racy.”

“We threw her in the deep end last time, she did well, she ran a placing before we started her in the Oaks.”

“But this time in she has come back in much more settled.”

Love Rose was one of four winners for John Dunn on Friday.

Bagrie admitted he is lucky to call on his talented cousin to drive his team.

“Nigel Armstrong said to me he is the best driver of trotters in the country and you would have to agree with him.”

“I am just lucky that he is family and he will drive my horses.”

Dunn also scored with Stoked To Haver, Belle’s Boy and Better Fly at Methven on Friday.