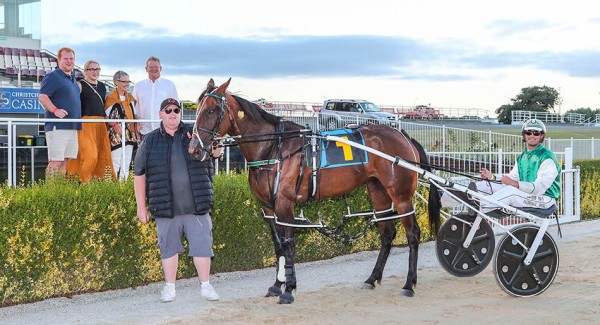 Harness racing journalist Jonny Turner admits he has a few nerves ahead of offering his first horse at the NZB Standardbred National Yearling Sales in Christchurch next week.

With McIntyre, a co-principal of Macca Lodge,  and Hailes a Group One winning breeder and previous vendor, they’re old hands at the sales.

But for Turner it is all new territory.

“It is all pretty new and exciting, I am really looking forward to sale day.”

“I have been there plenty of times before writing stories and talking to vendors and buyers about their horses but this is the first time I will have my own involvement.”

“We think we have a lovely horse, but I am not sure exactly what to expect.”

“I imagine once he gets in the ring there will be a few nerves, hopefully the buyers take a liking to him and the nerves turn to excitement.”

Debnita Rose was his best horse though.

“She was a tough mare with plenty of bottom to her, she retired reasonably young but fully sound because the boys were keen to get her into the breeding barn.”

“The mare’s first foal is a two-year-old filly and she’s showing some promise.”

“With this colt looking like quite an athletic type it made sense to have a crack at the sales with him.”

“He has all the attributes there, he looks like a really nice horse, but it will be up to the buyers to decide how good he looks.”

“It’s been a great ride so far, a lot of people are asking about him and saying good luck and things like that.”

Though he is looking forward to a healthy result at the National Yearling Sales, breeding is very much a hobby for Turner.

“I have been around horses for a long time, my father has bred some nice horses and I used to muck around with them on the farm quite a bit.”

“Most people probably don’t know I got my start in the game foaling mares at all hours of the morning and night working at Jaccka Lodge.”

“I worked for the McIntyres when they took over Macca Lodge, they are great people.”

“After that I did a lot of pre-training and grazing for other people when I was studying to be a journalist.”

“I don’t think there is any thrill quite like winning a race with a horse you’ve bred, done a lot of work with and had in your paddock since it was a foal.”

“It’s a big journey to the races and winning any kind of race is special, it wouldn’t worry me where it was.”

Lot 276 goes under the hammer for Turner, Hailes and McIntyre on day two of the Christchurch sale – Tuesday February 15.