The Dominator far from Green in Mile 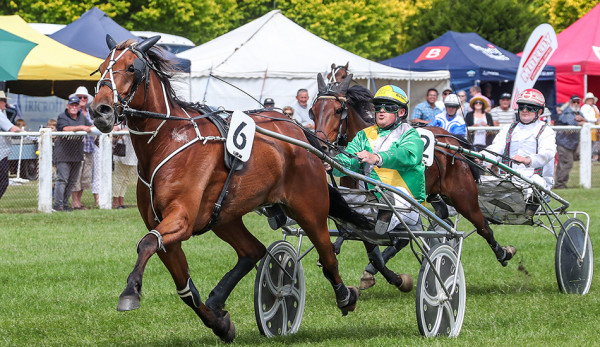 A perfect display from The Dominator saw him take out a chaotic running of the Trotters’ Green Mile at Methven on Sunday.

While the favourites Heavyweight Hero, One Apollo and Majestic Lavros galloped their way out of the feature event, the Donna Williamson trained seven-year-old made every post a winner in the hands of Craig Thornley.

The Dominator, who led throughout, was challenged briefly by Majestic Lavros, who loomed with a serious challenge in the home straight.

Though some may have thought the Mark Jones trained six-year-old was about to go past the eventual winner, The Dominator was set to give him a serious challenge.

“Craig said that he switched off when he was in front and he put the hammer down once he saw the other horse coming,” Williamson said.

The Dominator snuck underneath punters’ guards at his $27 win odds despite coming into Sunday’s feature after producing a strong effort in Sundees Son’s Dominion.

Stuck last at the bell and giving the leaders a huge headstart, the seven-year-old made up good ground to run seventh after being pushed wide by breaking runners.

“I was really pleased with that run,” Williamson said.

“Firstly, that he trotted all the way and secondly, that he hit the line really strongly.”

Thornley was not going to waste The Dominator’s chance to seize an opportunity behind the mobile on Sunday.

His camp just wishes he had done the same in his last appearance behind the gate, in the New Zealand Trotting Free-For-All.

“He will probably go to Addington next week and then I guess we will go to Omakau after that,” Williamson said.

“Mobiles are his thing, even though he made a hash of his perfect draw in the Free-For-All.”

“He hit the gate and that upset him, he is just a bit of a fragile boy in the brain.”

The Dominator’s victory continued a good spring and summer for Williamson, who has enjoyed a smooth run with the breeding stock at her Belmont Park stud.

Just one mare is left to foal at the Levels property.

“We just got one to go, a mare of Laurence Hanrahan’s.”

“Most mares are getting back in foal, it is a tricky old year with the weather.”

“But touch wood we are having a pretty good run.”

Bethany, the dam of champion retired pacer Lazarus is among the mares to have foaled at Belmont Park.

The 13-year-old foaled a healthy full brother to Lazarus in the spring.

Chin, Williamson and Ashburton trainer David Mitchell share in the ownership of a yearling full brother to Lazarus, who is in Mitchell’s care.

Sunday’s Pacers’ Green Mile was also won from the front with Henry Hubert leading throughout for driver Tim Williams.

The Robert Dunn trained pacer charged forward early before hanging tough in the home straight to hold off the finishes of Stylish Memphis and Classie Brigade.