Team McCarthy on fire at IDs 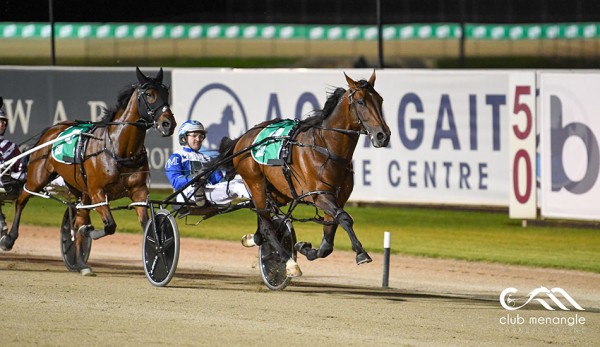 Is it a given Luke McCarthy will drive King Of Swing in the Inter Dominion final?

Sure, it’s close to a lock, but such has been Expensive Ego’s emergence, if he was to draw much better than King Of Swing in Saturday week’s final, then McCarthy would at least have some thinking to do.

Remember, we’re talking about a guy who has won every race that matters – except an Inter Dominion final. He’s driven in eight finals for three thirds.

As much as McCarthy is a loyal bloke and loves King Of Swing, it’s now clear there is very little between he and Expensive Ego after the second round of Inter Dominion heats at Bathurst last night.

Just as they did on opening night, both Expensive Ego and King Of Swing won again, but the former looked to do it with more flair again.

He ran that time despite working three-wide for the first lap before eventually finding the front from The Black Prince, and then never looking in danger.

“He’s right in the zone, this guy,” McCarthy said. “He’s done that before, worked hard in quick mile races and just kept going. He’s so strong. As I said the other night, he feels bottomless.”

McCarthy just nursed Expensive Ego through the closing stages as he easily held-off Triple Play, who had a charmed three pegs run and every chance, while The Black Price battled on well for third.

Just as he was on night one, Jason Grimson’s Majestic Cruiser was a real eye-catcher in fourth spot. He made a long run from a mile back, still hit the line strongly and looks to be building superbly towards the final.

Mach Da Vinci’s series is in latters after he followed a luckless fifth on night one with a disappointing ninth last night.

King Of Swing had to pull out all stops to win his heat in an epic battle with flying speedster Boncel Benjamin, who led and pushed the champ to a head in a 1min51.4sec mile rate.

But King Of Swing’s effort to work three-wide from the outside draw, sit parked and just keep coming was up with the best of his career.

“Gee he had to earn that tonight. He had to really dig-in in the home straight,” McCarthy said.

“He hadn’t raced for eight weeks so will keep building and building through the series.

“Horses like he and Expensive Ego won’t be fazed by the hard runs. They have great constitutions and will thrive on it.”

Credit to trainer Jason Grimson and driver Jack Trainor for “making” the race of the carnival so far by holding the front with Boncel Benjamin.

"It was worth a shot. I thought I might have had him coming off the last bend, but he's a champ for good reason. I was still really proud of our bloke," Trainor said.

Team McCarthy had a clean-sweep of the pacing heats when brilliant former Kiwi pacer Spirit Of St Louis stormed home to win the middle heat.

“He was terrific on night one, just needed the run and got edged-out, but that was a big win tonight,” McCarthy said.

As good as Spirit Of St Louis was, McCarthy quickly gave the win context.

“He’s a lovely horse, but King and Ego are head and shoulders above him. He’d need a cold sit and a lot of luck to win the final,” he said.

Team McCarthy only had four runners in the pacing series and left Bathurst with three wins and a second when old-timer Alta Orlando finished second to Spirit Of St Louis after leading.

Opening night heat winner Malcolms Rhythm – the only non-McCarthy pacer to win a heat so far – ran another mighty race for third to Spirit Of St Louis after sitting parked throughout.