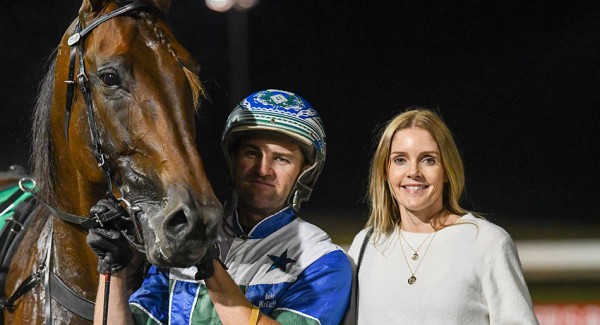 Luke McCarthy has no plans to take the foot off the throat on night three of the Inter Dominion.

McCarthy and his wife, Belinda, have dominated this NSW pacing series like no other so far with their four runners netting an unbelievable five wins and three seconds between them.

Yes, Team McCarthy has won five of the six pacing heats, with only David Aiken’s Malcolm’s Rhythm spoiling perfection. And even that by a whisker over Spirit Of St Louis on night one.

A combination of some good draws, well-earned intimidation power and confidence in his horses, will see McCarthy “maintain the rage” at Newcastle on Sunday night.

“They’ve all come through the heats well so far and it’s nice to get some better draws for King (of Swing, (Expensive) Ego and (Spirit Of St) Louis compared to Bathurst where they all drew wide,” Luke McCarthy said.

First out is Spirit Of St Louis, who lifted off a fighting nose second on opening night to circle the field and win in stunning style at Bathurst on Wednesday night.

He’s drawn gate three in Sunday night’s first pacing heat and looks a big hope of pushing forward and getting the front from early leader Max Delight (gate two). Other key runners like Line Up (10) and Boncel Benjamin (11) have back row draws.

King Of Swing will be the hottest favourite of the night from gate five in the second heat where he should gradually worked his way across to the front once speedsters inside him like Balraj (one), Bright Energy (two) and The Black Prince (four) sort themselves out.

It should be a walk in the park and an ideal way to finish the heats for the King.

Former Kiwi Triple Eight is drawn inside the back row (nine) and should keep poking through and get enough points to safely make the final.

Classy veteran Alta Orlando is the one of Team McCarthy’s drawn poorly at Newcastle. He’s outside the back row (11) in King Of Swing’s heat. Thankfully he’s got plenty of points so far with a pair of seconds and should qualify.

Expensive Ego, who has been THE star of the heats so far, should complete his clean sweep from gate four in the last heat.

It could be a bit of a contest, with Majestic Cruiser in gate three, Mach Dan (five), Pocket Of Terror (nine) and Malcolms Rhythm (10).

But the way Expensive Ego has been racing and stretching out to 2040m, it’ll be a major shock if he doesn’t win again.

Close out to continue hot form

Robbie Close’s brilliant form in the sulky looks set to continue at Addington on Sunday.

Craig "The Whale" Thompson looks at today's meeting at Ashburton.