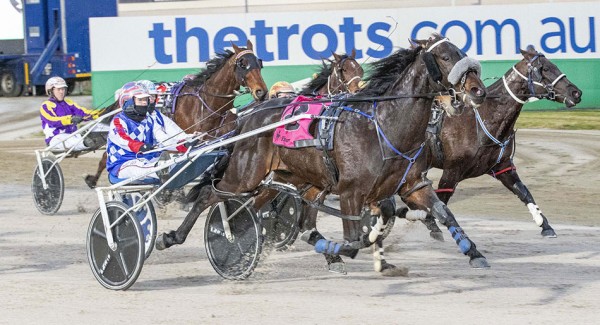 Classy former Kiwi Tango Tara is going to have some fun in Victoria.

The five-year-old improved off a slightly disappointing first-up defeat for Andy and Kate Gath at Melton to win very impressively.

“He may not have been suited going hard early and leading at his first run for us, but his work has also improved quite a bit at home since that run so he may have needed it,” Andy Gath said.

Tango Tara came three-wide without cover for the last lap and was simply too strong and classy for a moderate bunch in a slick 1min54.3sec mile rate for 1720m.

Tango Tara went to Australia in May after six wins from 26 starts in this country - and a 12th placing at last November's New Zealand Cup.

Andy and Kate Gath capped a good night when their underrated trotting mare Monaro Maro scored one of her biggest wins in the $30,000 Group 2 Matriarch Trot.

In a hotly-contested affair, Monaro Maro lifted after looking beaten on the home after doing plenty of work and just held-off big finishes from Keayang Livana and Illawong Stardust to win in a 1min58.6sec mile rate for 2240m.

“She deserved that. She’s had a terrific campaign and has earned a break now,” Andy Gath said.

Monaro Maro had five wins from 29 starts for part owner-trainer Merv Bryers in this country before heading across the Tasman in 2019.

Spellbound is headed to Queensland to clash with Amazing Dream in the new Group 1 Golden Girl at Albion Park, after smashing the clock and a small but strong mares’ race at Menangle.

She clocked a 1min50.1sec mile, but was privately-timed to run her own closing splits in an incredible 52.8 and 26.3sec.

Spellbound’s five Aussie runs for Nathan Purdon have netted four wins and a huge second, with the first four runs being at Melton.

Trainer Kevin Pizzuto thinks the best is yet to come for his former Kiwi pacer Arden Messi.

The four-year-old went one better than his brave last-start second to stablemate Loorim Lake in the Group 2 Treuer Memorial when he led throughout in a slick 1min51.8sec mile at Menangle last night.

“He was just a run short at Bankstown. It was a big run considering,” Pizzuto said. “I like him, he’s improving all the time.”

Pizzuto also snared third spot in the race with the handy Burnham Boy, who caught the eye first-up from a spell.

Trainer had a training and driving treble on the night with Mighty Flying Art and Our Madiba also winning on the night.

Gath, one of Australia’s best and most decorated drivers, showed great poise to move around midrace, control the tempo from outside the leader and win strongly aboard Leigh Graham’s handy trotter Nephew Of Sonoko.

Trainer David Aiken put Alford on his stable star for the first time a couple of weeks back and produced a stunning last-to-first midrace dash to win.

Alford kept the drive and this time he pushed the button earlier, using a front row draw to keep pressuring until comeback pacer Shadow Sax surrendered the front to him.

Max Delight paced a slick 1min53.9sec mile rate for 1720m and held-off Shadow Sax, who took the sprint lane, to win by a neck.

The jury is still out on a Queensland trip with NSW Derby winner Patsbeachstorm.

David Moran’s young star is winless in four runs this campaign, albeit all against older rivals, and is racing lengths below the sparkling form which won him the NSW Derby in late February.

Patsbeachstorm loomed as the winner on the home bend at Melton, but just battled away to finish second to the promising Sahara Sirocco.