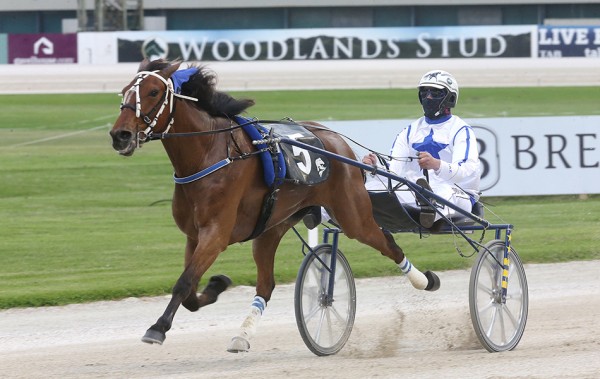 The daughter of Superfast Stuart had been in fine form heading into the meeting, posting three runner-up performances from her last four starts, and she rewarded her loyal followers with an emphatic victory.

The six-year-old mare stepped away well from her front row to take an early lead for trainer-driver Andrew Drake.

The pair didn’t relinquish their advantage for the remainder of the race and when Drake asked his mare to extend turning from home, she distanced her rivals to win by 12 lengths.

Drake, who also part-owns the mare, was duly delighted with the win.

“She hasn’t been stepping as quick with me and I noticed everyone was stepping her and leading from the get go.

“I thought tonight I would give it a go (leading) and as soon as she got to the front she just felt super.”

Drake has been over the moon with how his trotter has been performing and he is hoping that will continue, with a potential tilt at the Thames Trotting Cup (2200m) on the cards at Cambridge Raceway next week.

“She has been in great form, she is a happy horse, so I can’t complain. You might as well make the most of it,” Drake said.

“I am going to nominate her for the Thames Cup and see what she gets, otherwise I will just wait for the next Auckland meeting.”

Superfast Ninja had her first start for Drake in June last year after he was gifted a 50 percent share in the mare by Deborah Green, the wife of his employer, trainer Ray Green.

While disappointing in her first preparation, this time in she has won four races and placed on four other occasions.

“Last time in we didn’t get much luck, but this time in she has definitely improved,” Drake said.

Drake currently has two horses in his care, with his other charge, Susie Reignmaker, finishing fifth in the following race.

“After the last Cambridge meeting I gave her five days off. She trialled on Saturday and went well, the 2700m just might have got her tonight,” Drake said.

“She will definitely go to Cambridge next week, there is a 1700m fillies and mares race.”