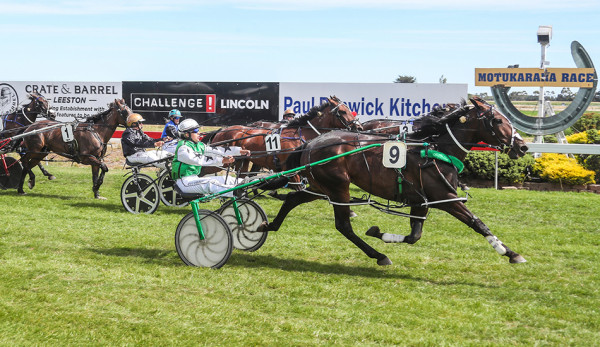 Woodend Beach trainer Matt Purvis recorded a winning double at Motukarara Raceway on Sunday, bringing his tally to 19 wins for the season, eight more than his previous best term.

The daughter of Bettor’s Delight was given a plum drive by Alana Cameron and found the one-one with 800m to go before improving three-wide turning for home where she made light work of her opposition, running away to a three-length victory over Mickey Fitz, with a further half-head back to Judgement Bay in third.

Purvis was pleased with the win, which continues a solid summer for the six-year-old mare.

“It was a peach of a drive by Alana in the junior race,” Purvis said.

“Once she lobbed the one-one from about the 800m from home, I thought with her speed she was going to be very hard to beat.

“She has become a wee eftpos card which is the best bit. She just loves racing and as long as she is driven the same way each time, she can race every week, so it’s good for the owners.”

It was the four-year-old gelding’s third win from his last four starts, but Purvis admitted to being slightly anxious when his charge was caught five back on the fence for the majority of the journey.

However, he was presented wide down the home straight by driver Alana Cameron and ran over the top of his rivals to win by three-quarters of a length over She’s Tough.

“It was a bit questionable when he was five back on the fence, but I thought 2800m was going to be his best friend and it just shows he loves distance,” Purvis said.

“He did it pretty easily and he wasn’t blowing much after the race, so he should really bounce through that.

“He just tries his guts out and that is the best thing about him.”