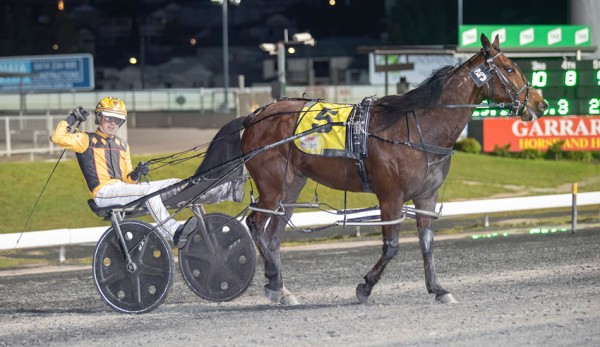 The rise and rise of Spirit Of St Louis continued at Albion Park over the weekend.

The former Kiwi five-year-old finished last campaign as the top seed in Australia’s open-class ranks following the retirement of his megastar stablemate King Of Swing.

Spirit Of St Louis’s seconds to King Of Swing in the Hunter Cup and Miracle Mile were arguably as good a runs as the winner.

The son of Sweet Lou has won both runs back from a spell, albeit narrowly, and clearly looms as the horse to beat in the upcoming Group 1 double – Sunshine Sprint (July 16) and Blacks A Fake (July 23).

It was a big effort on Saturday night to come from off the pace and rundown emerging former Kiwi pacer Fire Fox in a 55.8sec last half on a very wet track in the Wondais Mate Pace (1660m).

In the end, regular driver Jack Callaghan just nursed Spirit Of St Louis to the line for a half-neck win in a 1min53sec mile rate.

“He’s come back so well,” co-trainer Luke McCarthy said. “He obviously took the next step last campaign and is now a complete racehorse now. Where he used to rely on his speed, he’s more versatile now.”

On the flipside, former top class Kiwi pacer AG’s White Socks will need to improve to be a factor in the big races.

McCarthy drove him at his first start for the stable and made an early move to sit parked before he weakened from the home bend to finish 12.4m from the winner in ninth place.

This time last year young trainer Gemma Hewitt loved her Queensland trip so much she decided to make it home.

Hewitt’s stable star Kashed Up ran a slashing fifth to Amazing Dream last year as a three-year-old and turned his form around with a shock win as a $51 outsider in the Group Queensland Sun at Albion Park last night.

The win gets the son of For A Reason a free ticket into next week’s feature.

Kashed Up led then driver Brendan Barnes took a sit on former Kiwi pacer Slip The Hundy before using the sprint lane to win in a slick 1min54.8sec mile rate.

Another winner of note on the night was classy six-year-old Rockin Marty in the opening.

The David Hewitt-trained gelding stormed home to easily win the opening race in a 1min52.4sec mile rate for 1660m.

More than a year since he was cut down with injury, young WA star Lavra Joe is back and winning.

The four-year-old son of Roll With Joe returned with a dominant win to take his record to 21 wins and eight placings from just 35 starts.

It was Lavra Joe’s first run since finishing second at Gloucester Park on June 11, last year when trainer Ray Jones was eyeing-off a Queensland raid for the inaugural Rising Sun won by Amazing Dream.

Champion driver Chris Lewis was reunited with the star and took full advantage of a pole draw to lead and dictate terms with a 60.1sec middle half over 2130m and then dashing home in 55.6 and 27.1sec for a 1min55.8sec mile rate.

If Lavra Joe continues to build, he will be a major player in WA’s biggest races later this year and early next.

Another high-class four-year-old Jumpingjackmac atoned for a flop a week earlier when he won a farcical free-for-all at Gloucester Park last night.

In one of the slowest run race in modern Gloucester Park history, Jumpingjackmac walked through a 72.6sec lead time and 63.8sec first half before dashing home in 56.3 and 27sec in a 2min2.3sec mile rate for 2536m.

On the same card, emerging thoroughbred trainer Michael Grantham kept his “hand in” as a driver with victory aboard Mach Three gelding Valbonne in race three.

Popular trainer Ross Graham has the Inter Dominion in his sights.

It is 14 years since Graham last tackled the Inter Dominion with his then classy trotter Viva La Fever, who finished fourth in the 2007 Adelaide final then fifth the following year in Melbourne.

The rapid improvement of his six-year-old gelding Nephew Of Sonoko has seen the gelding emerge as a genuine Inter Dominion contender.

Nephew Of Sonoko made it three wins on end, two of them beating superstar Majestuoso, when he cruised to victory in the Group 3 Touch Merchant Trotters’ free-for-all (2190m) at Shepparton last night.

Majestuoso made an early move from the back row to sit outside Nephew Of Sonoko, but the race was over coming to the home bend when driver James Herbertson said go on the leader.

“I can’t say exactly why he’s suddenly gone to another level at his age, but he has been a slow maturer,” Graham said.

“He ran a huge race in the Vicbred final at three and teased us with his potential, but it’s been three years getting back to that sort of run.

“We’ve put a water-walker in and it’s really helped him. It’s part work and part rehab.”

Majestuoso, who finished last campaign as Australia’s best trotter, just battled into third spot and has been beaten in all three runs this campaign.

Former star pacer Bling It On’s relocation to stud duties in Queensland got the ultimate “kick along” when his son, Hold Onto Ya Bling, won the Group 3 Paleface Adios Classic for babies at Albion Park.

Belinda McCarthy made the decision to move Bling It On from Cobbitty Equine’s NSW based to Queensland to make his progeny eligible for a string of Queensland-bred bonuses.

Hold Onto Ya Bling has kept improving through seven starts and has now won three of them for trainer Shannon Price.

The win also came in the week where the innovative Cobbitty Farms announced a two-year-old race series for progeny of its stallions.

There will be a $100,000 colts and geldings final and a $100,000 final for fillies from stallions standing at Cobbitty this season.

The stallions are: Bling It On, Captain Midnight, For A Reason, Huntsville, Jilliby Kung Fu, King Of Swing and McWicked.