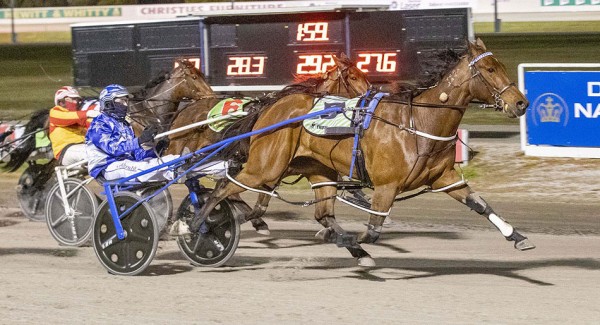 The young horseman was fresh from what he called a “character building” Victoria Cup night when stable stars Amazing Dream and American Dealer both ran below their best.

But Spellbound, the mare who first put Purdon on the map when he moved to Lara in Victoria, delivered for him again with a sparkling first-up win in the $30,000 Group 3 Make Mine Cullen (1710m) at Ballarat last night.

Despite hanging noticeably out three-wide on the final bend, Spellbound went on to beat David Miles’ stablemates The Panthiest and Enchanted Stride by 2.6m in a blistering 1min52.8sec mile rate.

Spellbound, who boasts five wins and three placings from eight runs for Purdon, will back-up at Geelong next Saturday night and again a week later in the Group 1 Queen of the Pacific at Melton.

King Of Swing is thriving during a short break since the Victoria Cup and will bypass Saturday week’s Group 1 Len Smith Mile at Menangle.

Co-trainer Luke McCarthy said the dual Miracle Mile winner would likely have just one lead-up run before the first round of NSW Inter Dominion heats on November 27 at Menangle.

“There’s a chance he could go into first-up, but more likely we’ll run him in a free-for-all a fortnight before that first round of heats,” he said.

“We’re happy to skip the Len Smith and focus on the Inter Dominion with him, especially with the Hunter Cup and Miracle Mile to come after Christmas.”

He returned from a short spell with a workmanlike win at Menangle last night.

McCarthy was able to land the one-one trail on Expensive Ego when stablemate Alta Orlando led, but he had to dig deep to wear down the leader late and win by two metres in a 1min52.5sec mile.

In Expensive Ego’s defence, they did scorch the last split in 26.1sec.

“He felt really strong on the line and that’ll top him off nicely,” McCarthy said.

Almost 19 months after he won the NSW Derby, former Kiwi star Line Up resumed his career with a win at Menangle.

Line Up looked to have the world at his hooves when he added the NSW Derby to his Victoria Derby victory for Anthony Butt and Sonya Smith.

But injury intervened and then owner Emilio Rosati split with Butt and Smith, which saw Line Up move back to Menangle to join Darren Binskin’s barn.

Line Up turned heads with a slashing trial win over Expensive Ego recently and was sent out a $1.30 favourite for his first-up run last night.

He worked to the front and got the job done, but it was closer than most expected with just a half-head to spare over Fairy Tinkerbell, who trailed him throughout, in a 1min52sec mile.

No doubt the run will improve Line Up a lot as he prepares for the NSW Inter Dominion, starting on November 27.

It will be interesting to see if Binskin has a crack at Saturday week’s Len Smith Mile so early in Line Up’s comeback campaign.

Manners mean so much, especially with trotters.

And, as good as Queen Elida is, it was her manners that won her and former Kiwi horseman Brent Lilley last night’s $50,000 Group 1 Victoria Trotters’ Oaks at Ballarat,

First, the daughter of Love You showed lovely manners and zip at the start for driver Chris Alford to cross her main danger, Banglez, and lead.

Then, in a race changing blink, Queen Elida kept her rhythm and gait when the heat really went on in the last 100m, while Banglez galloped when she looked set to run past the leader and win.

Lilley’s done a super job with Queen Elida, who had three unplaced NZ starts before joining his barn where she’s raced 14 times for eight wins and five placings,

She deserved that win after finishing second in the NSW Trotters’ Oaks back in May.

In a hotly contested $50,000 Group 2 Mount Eden Sprint, Hall Jr somehow found the one-one trail from a wide draw (gate seven), stalked the two main dangers (Vampiro leading and Perfect Major outside him) and nabbed them late to win by 1.4m in a 1min53.3sec mile rate for 1730m.

Hurricane Harley, who built a fantastic record including two wins over Lochinvar Art for Emma Stewart and Clayton Tonkin, had a stint on the sidelines with injury and was sent to Prentice with the big Fremantle/WA Cup double in mind in January.

On the same card, Team Bond’s exciting three-year-old Dont Bother Me None continued his rise with a powerhouse win in a strong race.

Despite sitting parked, the Kiwi import was simply too strong in a 1min57sec mile rate for 2536m, beating the leader Stamford – a brother to Magnificent Storm – and the talented Otis, who closed strongly late.

Dont Bother Me None has raced just 13 times for nine wins and two seconds and looks every bit a future star of the sport.

What a night for Jarrod Alchin and stunning team of babies.

Alchin’s pin-up juvenile My Ultimate Byron made it seven wins from as many starts when he led throughout in a 1min50.9sec mile in his semi-final of the NSW Breeders Challenge series.

But, an hour earlier, My Ultimate Ronnie made the most of a cold sit on the brilliant Smaltese to run him down and win the first semi by 5.5m in a scorching Australasian 2YO record 1min50.4sec mile.

Smaltese led from the pole in a 26.9sec opening quarter and kept rolling with splits of 28.4 and 27.3sec before being nabbed late in a 27.8sec closing quarter.

Alchin has always insisted there isn’t much between his pair so maybe it’s not a given Cam Hart will stick with driving “Byron” in the final if “Ronnie” happens to draw a lot better.

Former Kiwi star Turn It Up made it a hat-trick of wins this campaign at Albion Park last night.

The injury-plagued six-year-old used the pole to lead easily for driver Shane Graham, cruised through a 62sec middle split then ripped home in 55.1 and 26.5sec to beat Blacksadance, who trailed him, and Colt Thirty One, who sat parked.

Just a race later, another former classy Kiwi pacer Mach Da Vinci returned from a spell with a stunning win and he looks set to really stamp himself this campaign.

Things are certainly looking up for decorated trainer-driver John Justice.

The son of Mach Three did all the work and roared away to win by 15.4m, making it two-from-two this campaign.

Helluva raced four times in NZ for an Ashburton win and Oamaru second and has since won three of just four starts for Justice.

Plymouth Chubb is bringing back memories.

Australia’s most exciting young trotter is reliving the great days when father-daughter Peter and Kerryn Manning combined with a plethora of stars, most notably the great Knight Pistol.

Plymouth Chubb, a Majestic Son gelding out In The Pocket mare Pocket Fantasy, thrashed his rivals yet again in the $30,000 Group 2 Tatlow Stakes.

Since galloping on debut, Plymouth Chubb has won eight on end.