Ron McKinley puts it all together in Addington boilover

The Trent Yesberg-trained Ron McKinley has been somewhat out of sorts since winning on debut back in July. That all changed Thursday night at Addington, when he put up another staying performance of note to take out the First Direct Taxis Mobile Pace at 43 to one on the tote.

On a night dominated by front runners Ron McKinley, in the hands of Tim Williams, came from midfield in the running line to produce a sustained run wide and get up by a head from another outsider in Acento.

“I knew once I got around the bend we’d get some of it,” said Tim. “He felt really good when balanced up and it was a great effort. He’s still a bit green but certainly has the speed.”

That makes two wins from four starts for the gelding, who didn’t feature in two earlier races this summer. He galloped away at Rangiora and was never in it from the back on the grass at Motukarara over Christmas.

“He’s been freshened up and after five runs in a row where he galloped, lately he’s been trialling well”, Trent reported after the race. “He really isn't an easy horse to drive or train and it’s taken a lot of perseverance to get him right.” 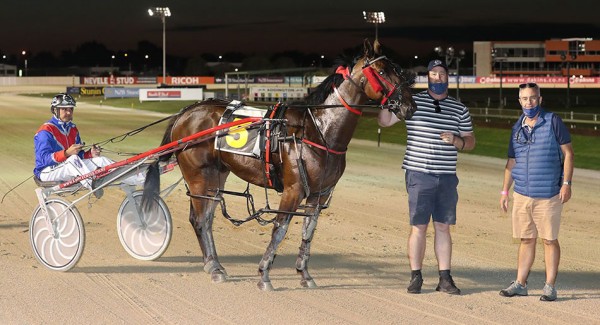 Ron McKinley is owned by Trent’s partner Sarah Yesberg and his brother Dane who lives in Perth.

The Yesbergs secured the now four year old for $25,000 at the inaugural 2019 NZB Yearling Sales. He’s by Bettor’s Delight out of the Mach Three mare Mach’s Excuse and was bred by Woodlands Stud’s Dr Andrew Grierson.

“He appealed on type and has always looked likely to shape up as a stayer”, said Trent. ”We could see his potential and with some vet help to identify issues we feel like we’re finally there with him.”

Ron McKinley’s fictitious name was that of a typical Kiwi bloke in an improvisation show at the Court Theatre that Trent and Sarah attended.

“He was hilarious, and on the drive home we decided that one day we’d name a horse after the character.“

No doubt any Ron McKinleys out there who follow harness racing are happy with the result so far.

When speaking back in July after his maiden win, Trent signalled confidence that in his next campaign and with a bit more ringcraft he’ll be a really nice horse. That is certainly now proving to be the case for his owners.

“Anyone who saw me on course would have seen how excited I was for him to get this win.”