Tommy Waterhouse showed how much he loves Addington with a powerful front-running display to win the Listed Betavet Uncut Gems Geldings And Entires Classic at Addington on Friday night.

Trainer-driver Kirstin Barclay never gave her rivals a look in as she cut out strong sectionals in the lead with the four-year-old who was strong to the line.

The Southland horsewoman had faith in her horse and how ready he was to run a big race.

Her judgment and her training and driving performance proved to be absolutely pinpoint.

“He is a pretty fast horse and I thought he was pretty right, so I just let him run tonight and he did us proud,” Barclay told Harness Racing Unhinged.

“I was trying to give him a breather but he was quite happy.” 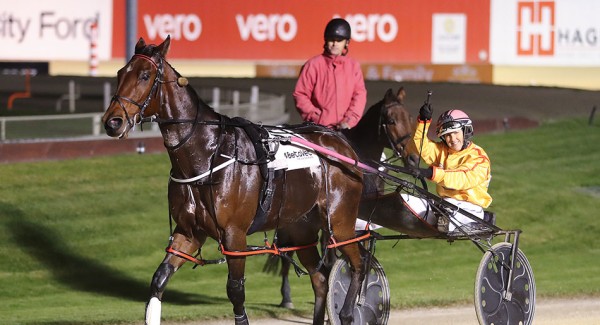 Two years ago, her then unbeaten pacer U May Cullect made it seven starts for seven wins when taking out the Listed Uncut Gems Geldings And Entires Classic.

Beach training was a key to U May Cullect’s career and Barclay revealed it has also been vital for Tommy Waterhouse.

“He is quite a strong willed, full on horse but since we have been taking him to the beach he is just a different horse out there.”

“He really enjoys it, he is actually more relaxed out there and it has settled him down a bit.”

In his only other start at Addington, Tommy Waterhouse was a big winner of the South Of The Waitaki race on Show Day during the New Zealand Cup Carnvial.

Barclay already has this year’s New Zealand Cup Week on her mind.

“He will head for a spell now, we will look to bring him back up at Cup Week again.”

“He just loves the track up here.”

“I think he has earned a holiday here, so back home for some R&R.”

A trifecta of trainers have combined to produce Tommy Waterhouse the racehorse.

McEwan purchased the pacer from another trainer in Tony Barron who offered the horse at the NZB Standardbred National Yearling Sales in 2019.

“He is a pretty cool horse to have, I am actually lucky to be training him because his owner is a capable trainer himself,” Barclay said.

Darling Me stamped her class to win the first, the Bodyguard Health Uncut Gems Mares Classic.