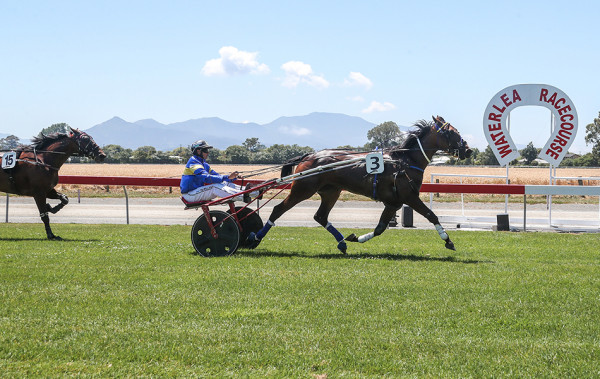 Ohoka trainer Paul Kerr took two runners to Waterlea Raceway on Friday and he went home with the perfect result.

Greenback Betty started the day off well when winning the opening race of the card, the Kiwiseed Trot (2400m).

She had an early gallop going over the crossing but quickly settled. At the top of the backstraight driver Tim Williams pushed his charge forward to take the lead and they did not relinquish their advantage, running away to a three-length victory over Shiffty, with a further nine lengths back to Tyene in third.

“It was good to see the trotter practically do everything right,” Kerr said.

“She went away really well, she just broke going over the crossing and Tim said she just went out in sympathy when the one on the outside galloped. It was only for a few strides and she went straight back into it (trotting gait) and never put a foot wrong from there.”

Kerr was just as pleased with Duffy Hollow’s fresh-up victory in the following race, the Coles & JT Best Contracting Mobile Pace (1850m). The three-year-old gelding was stuck out three-wide early on before gaining cover behind Best Trio. He then found the trail after Best Trio broke and he was able dash up the passing lane to record a 1-3/4 length victory over Alta Redeemer, with Perfect Cut a further two lengths back in third.

“Duffy Hollow really deserved his win because he just had no luck prior to Christmas racing, so we gave him a break for three weeks and he has just come back terrific,” Kerr said.

“Today just worked out perfectly for him and he showed he has a lot of speed and he finished it off beautifully.”

Kerr said getting the early double was made even sweeter by the fact he was able to relax for the rest of the meeting and take in the atmosphere at the summer meeting.

“It was a good way to tick it off, especially in the first two races, you can get it over and done with nice and early,” he said.

“I love coming up to Blenheim. It is a terrific club and they always look after everybody.

“The weather has been great and they have had a good crowd, which is good for a Friday afternoon.”

Kerr is now hoping both of his runners can replicate their results on the second day of the meeting on Sunday.

“They will back-up on the second day and see what happens, they both rise in class,” he said.

“It is never easy but Duffy Hollows comes in on the fresh side and he won it really nice today with a bit in hand, so I expect another really good run from him on Sunday.”