Patience pays off with Galleons Ambassador

The connections of Galleons Ambassador were rewarded for their patience with their mare when she broke through for her maiden win in the Anne Thompson Memorial Graduation Series (Heat 2) Trot at Rangiora on Sunday.

The daughter of Love You was first-up for trainer-driver John Morrison whose tactical navigation proved the making of Sunday’s result.

After settling towards the rear of the field, Morrison sent his charge three wide down the back straight to assume the lead. Driver Ricky May took a similar approach with Majestic Whisper, however, Galleons Ambassador was able to see off his challenge but had to call on all her talent in the home straight to see off a fast-finishing Lil Miss Muscles to win by a head.

“The other one (Lil Miss Muscles) was coming quick. It got close but lucky the line came up,” Morrison said.

“She went well but she is probably not suited to the shorter distance trips, she will be better once she gets up in distance.” 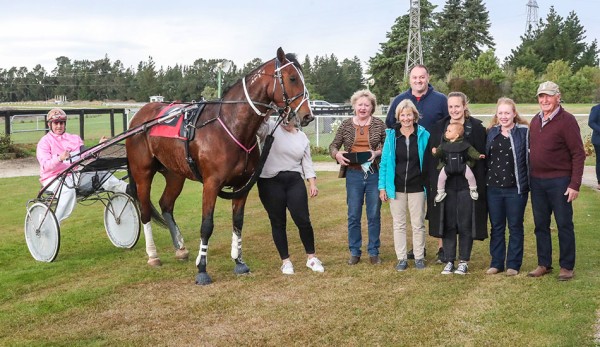 It was Galleons Ambassador first win from eight starts and Morrison said he is thankful to her owners for keeping the faith.

“She has taken a bit of time and it is lucky that I have got loyal owners that have been happy enough to wait.

“She has come a long nicely.”

Galleons Ambassador hadn’t raced since last spring and Morrison said he gave her a decent break before giving her a slow build-up culminating in Sunday’s resumption.

“She was good last time in but when spring hit she had a lot of problems with tying up and a few niggly issues, so I turned her out for a month over Christmas and have just worked her up quietly,” Morrison said.

A return to Rangiora in a fortnight is now on the cards for the mare.

“She will go to the Anne Thomspon Final and we will reassess after that,” Morrison said.