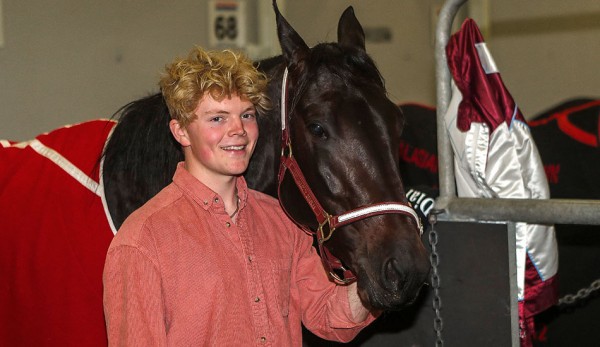 With four generations of harness racing success behind him many may have thought Carter Dalgety was destined to become a junior driver.

But the path the son of trainers Cran and Chrissie Dalgety has taken to the track isn’t typical of a youngster effectively born into the sport.

Dalgety admitted driving hasn’t always been on his agenda, but that changed sharply around three years ago.

“I bought a horse from the sales quite a few years ago – Sezana – and I drove her every day,” the junior driver said.

“That was probably the time when I fell in love with the horses.”

“From that point on I thought I would get my trials licence and I was lucky enough that Dad sent me to Auckland with Krug and a few two-year-olds and I got to drive at the trials up there.”

“That was when I really caught the bug, I went over to Menangle and worked with Jack Trainor for two weeks after that and that was really good, too.”

“All of those things sort of added up, I thought you can have a bit of fun doing this and you can learn every day, so I thought I would give it a good crack.”

Dalgety is not only following in his family’s footsteps.

His parents’ Kentuckiana Lodge stables have been the home of two superstar junior drivers in Mark Jones and the now American-based Dexter Dunn.

Rising star Sarah O’Reilly is currently in their ranks and her career is on a huge upward turn.

Dalgety has talked to Dunn about how to approach his driving and the champion reinsman has passed on valuable advice.

“We do speak a lot, he told me to give him a ring before my first drive so I will do that."

“He has been super, I have talked to him a lot about the pressure.”

“Obviously Dad being Dad and having nice horses, he has said there is not going to be just one person watching me there is going to be a lot of eyes on you.”

“He is a huge help, he was pretty much an older brother to me when he was here – and now – even though he is far away.”

Harness racing won’t be the only focus for Dalgety moving forward.

The junior driver is studying a Bachelor of Commerce majoring in Supply Chain Management at Lincoln University.

Dalgety didn’t hit the track in the opening week of the season, but he is hopeful he has drives lined up for this week.

The reinsman said he is prepared to travel far and wide for any driving opportunities.

Dalgety has a harness racing pedigree like few others in the sport.

His father Cran, grandfather Jim and great grandfather the late Jim Dalgety Snr have enjoyed huge success between them.

Dalgety’s mother Chrissie is one of four siblings to have enjoyed Group One glory, alongside brothers Tim, Anthony and Roddy Butt.

The reinsman also has two champion trainers among his mother’s family in great grandfathers the late Wes Butt and the late Derek Jones.