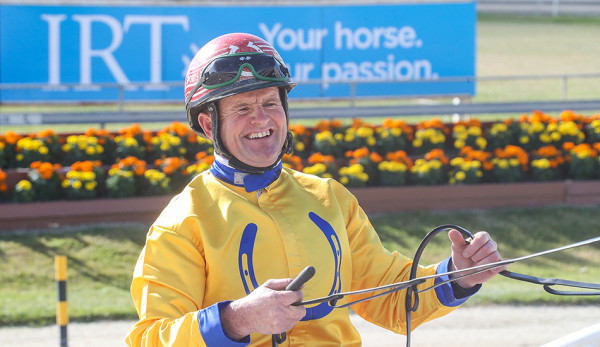 As happy as Gerard O’Reilly was to bring up his 600th career win at Addington on Wednesday it wasn’t even the highlight of his season.

Because the popular horseman admits these days his biggest thrills in harness racing come from the success of his driver daughter Sarah.

O’Reilly reined win 600 when Immer Besser recorded the second win of her career for trainer Kevin Townley in race two on Wednesday.

The 56-year-old O’Reilly’s drives have won over $5.7million in stakes, with 131 of those 600 wins coming in trotting races for the youngest of the five O’Reilly brothers.

“I knew it was coming up (the milestone) because Matt Markham told me a while ago,” O’Reilly told HRNZ.

“It is satisfying to get to that mark but these days I get the most joy out of watching Sarah’s success.

“She is doing so well and we are very proud of her.”

O’Reilly has plenty to be proud of himself though with his 600 wins coming at a time when he only trains half a dozen horses and he rarely drives for the biggest and most powerful stables.

He rates Tiger Tara, who he drove to two group one wins before he left for his all-conquering Australian campaign, as the best horse he has driven by some margin and then Anne Franco.

O’Reilly says he will keep driving and is enjoying but doesn’t think he will be sticking around in the sulky for 10 years.

“I’ll go for a while longer.” His win was the highlight of a rare Addington Wednesday meeting that also saw Hayden Cullen register his first win in his new colours when Cosmic Major made a winning debut in the two-year-old race.

Cullen has launched his new colours, blue with white triangles and silver grey sleeves and they will soon be a force to be reckoned with.

Cosmic Major was way too good for his rivals as Cullen starts to flex the juvenile muscle in his team, the winner a son of Art Major and the former handy two and three-year-old Rozelski.

Others to star on the day included Robbie Close who reined the last three winners while Brent White had two training successes.