One each for Morrison & O’Reilly at Timaru 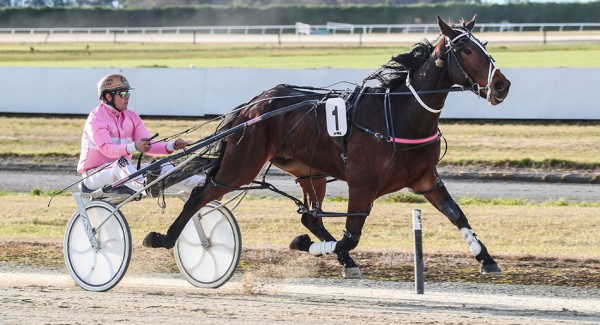 John Morrison’s win with Harrison at Timaru on Sunday helped him regain his six-win lead over Sarah O’Reilly as the final month of their national junior drivers premiership race approaches.

O’Reilly struck first at Phar Lap Raceway, scoring her 47th win of the season when Shards Of Manhattan capitalised on the perfect trip in the trail her driver found for her.

The junior driver had to do some manoeuvring to get the Cran and Chrissie Dalgety trained three-year-old into the clear when her sweet trip came to a premature end when the leader tired but once she did the pair dashed home to win race 7.

“I was pretty confident but then I was a little bit worried on the turn,” O’Reilly said.

“But the leader managed to keep going well enough and we were able to get a gap.”

“She has to be driven with one run and she had had a few bad draws, so it was good that everything worked out.”

O’Reilly knows she has a big task in front of her to run down Morrison in the junior drivers premiership but she will be giving it her all.

Morrison quickly struck back with his win in race 10 with Harrison, who he also trains.

The junior driver will go into the last month of the season with good respect for his main rival in his quest for a third junior drivers premiership.

“I wouldn’t mind if there is there is a tie, its great that we are both from Mid Canterbury,” Morrison said.

“Sarah is driving really well and getting some good drives.”

“There is a good bunch of junior drivers coming through.”\

The key to Harrison helping Morrison to maintain his six-win lead in the junior drivers premiership was the pacer switching back to mobile racing and he missed away in his recent standing starts.

“He has got a few tricks up his sleeve,” Morrison said.

“He has done well in his last couple of starts, he is usually running in the money when he does things right.”

“It was good for him to be able to be on the markers and not chasing them and going around three wide for a change.”

Morrison will continue to campaign Harrison through the winter.

The pacer was initially a good standing start exponent and his trainer-driver hopes he can produce those kind of beginnings again in the future.