One Change dominant at Addington

Patience paid dividends for the connections of One Change at Addington Raceway on Friday night.

The Bettor’s Delight gelding had been knocking on the door of victory since his raceday return earlier this year and he finally delivered with a dominant performance in The Box Seat Mobile Pace (1980m).

Previously trained by Mark Purdon and Natalie Rasmussen, One Change had won 16 races on both sides of the Tasman prior to Friday, including three at Group One level. 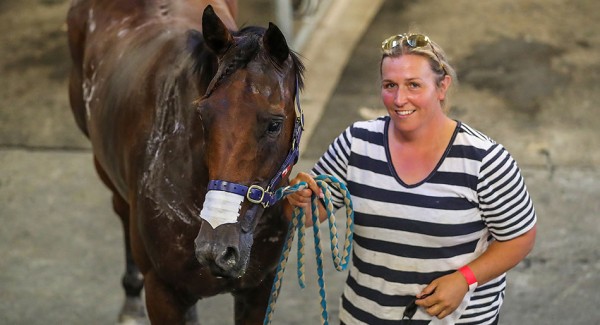 He joined Amber Hoffman’s Waikouaiti barn upon his return from Australia last year in the hopes beach training would help rehabilitate the talented pacer, and Hoffman reported he has thrived since joining her stable.

After several months in her care, One Change made his stable debut last month when he ran fifth in the Gr.3 Ranfurly Transport LTC/RD Petroleum FFA (2000m). While he was pulled up after breaking at the start in the Gr.3 Northern Southland Cup (2700m) he placed in his next two starts, including the Gr.3 Invercargill Cup (2700m) last start.

He was subsequently sent out a $1.70 favourite on Friday and duly delivered for punters.

He was sent forward off the gate to take an early lead for driver Blair Orange who was able to dictate terms throughout and One Change showed his class when powering away to a 3-1/2 length victory over Classie Brigade, with a further two lengths back to Henry Hubert in third.

Hoffman was impressed with what she saw and delighted to reward his owners for their patience.

“He went really well. It was good to see him back winning,” Hoffman said.

One Change made his New Zealand return earlier this year, but he hadn’t been sighted on raceday since March last year owing to a niggly issue Hoffman believes they are now on top of.

“He had an injury, just a problem with a fetlock, and Mark and Natalie thought he needed a bit of a quiet life at the beach, so Natalie rang me up one day asking if it was okay if he came down and of course I accepted,” Hoffman said.

“He really enjoys the beach and the straight-line training is definitely helping him. He spends a lot of time out in the surf and does a lot of work out there.

“We didn’t really have to change much, he came down in amazing order. It is just a matter of keeping him happy and sound.

“At this stage it is really good, so onwards and upwards hopefully.”

Hoffman has really enjoyed having One Change in her stable and she is hoping there are some exciting times ahead with the talented pacer.

“I am very grateful to be training a horse like him, it has been awesome,” she said.

“We are planning to go to Ashburton next week with him and after that we will see what is coming up, how he is, and go from there.”