A first for Sky Major's progeny

Dickie gets off the mark

Josh Dickie has had his first Australian winner since moving across the Tasman permanently. The former South Auckland-based trainer-driver guided Three Bros to victory in the Allied Express Trot at Melton in Victoria on Friday night. Dickie and partner Sammy Kilgour live and train at a property not far from the racetrack.

Trotters on the move

2021 New Zealand Trotting Oaks winner Aldebaran Floss has changed stables from Murray Alfeld to Megan McIntyre. The four-year-old daughter of Muscle Mass has won three from 15. Another top trotter on the move is Phoebe Imperial, who’s won eight from 53. He has headed south from Nicky Chilcott to Bob Butt while the well-performed Massive Metro’s win at Alexandra Park on Friday was his tenth overall but his first for nearly two years (March 2019).

The Richard and Emmett Brosnan-trained Interdominion winner Maori Law finished second to Im Ready Jet in the Group 2 Cochrans Trotting Cup at Ballarat on Saturday, while Kiwi star Majestic Man disappointed. He led for a time but galloped under pressure, and was not a factor.

The premier sire in four different countries in the one year (USA, Canada, Australia and New Zealand) Bettor’s Delight has become the leading stakemoney sire in North America for the eighth time in the last 11 seasons. In this latest season his stock earned over $US21m, $1.6m ahead of Somebeachsomewhere.

Minstrel too good in Fremantle Cup

The former Canterbury pacer Minstrel made it 15 wins from 28 starts when he nosed out stablemate Patronus in the $300,000 Group One Fremantle Cup on Saturday night. Minstrel, who had four wins from 10 starts for David and Catherine Butt in this country, is now with gun Western Australian trainers Greg and Skye Bond. He's also had 10 placings, earning nearly half a million dollars in stakes.

Another talented former Kiwi pacer L L Cool J returned to winning form at Albion Park on Saturday night. Driver Shane Graham pushed forward from a handy draw to lead, forcing favourite Governor Jujon to sit parked for a while before he was able to drop-in for the trail. L L Cool J zipped home in 55 flat and 27sec flat to hold-off Governor Jujon by a half-neck with another talented former Kiwi pacer, Speech Is Silver in third spot.

The itinerary for the NZB Standardbred Yearling Sales On-Farm parades in Canterbury has been confirmed for Monday January 31 and February 1, ahead of the sales at Karaka and Christchurch from February 13-16. 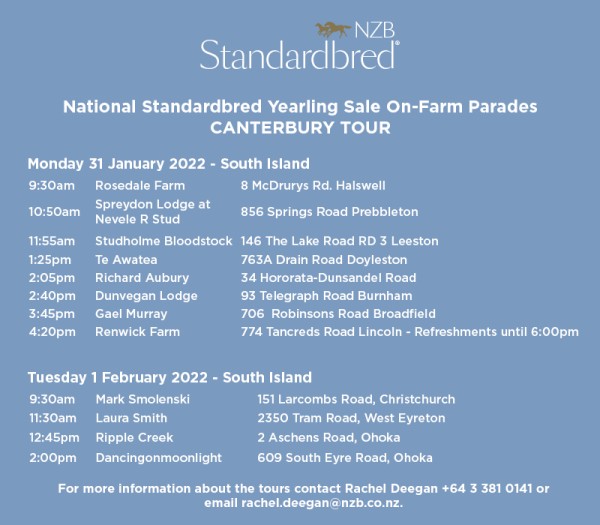 The Invercargill Harness Racing Club’s Ascot Park Hotel Invercargill Cup Day will still take place at Ascot Park Raceway in Invercargill on Saturday but will do so in accordance within the rules and guidelines set out in the Covid-19 Protection Framework (Red Traffic Light setting). Much of the entertainment and competitions organised for the day will be curtailed as a consequence of the traffic light settings. Industry participants and essential workers plus owners, ticketed guests, sponsors and members who can be housed in separate bubbles of under 100 people, can attend. Anyone attending must produce their vaccine passport at the gate which will be manned all day long.

The day will feature the prestigious Group 3 Ascot Park Hotel Invercargill Cup to be run over 2700 metres for a stake of $30,000, the Arden Lodge Robin Dundee Crown plus a heat of the Alabar Southern Supremacy Stakes. Racing will start at 12.20pm.