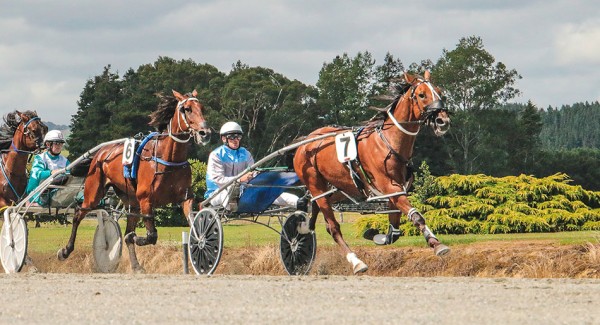 Southlander Colin Lee picked the perfect place to notch up 50 winners when Timzee won by more than a length on Sunday. On his home track at Wyndham Lee powered up the passing lane to make it win number 50 from just 241 starts since the mid 1970s. He also co-trains the horse with brother Gordon and co-owns the six-year-old gelding with Neil Timms, who the horse is named after.

Two-time New Zealand Cup runner-up and former Miracle Mile champion Spankem has been at the trials after a prolonged injury break. The winner of 20 races, the now seven-year-old was last in a quietly-driven five-horse trial at Rangiora yesterday. After his first public hit out in seven months the reports are that he did it well, and has pulled up in good shape.

Cruz Bromac loves winning on a Tuesday but yesterday's triumph was a world away from his New Zealand Cup triumph in 2019. The now 10-year-old won first up for new trainer Jason Grimson at Menangle by over three lengths. It's Cruz Bromac's third race and first win since coming back from a fetlock injury. At the same meeting (Just) Remember Me also won for caretaker trainer Carter Dalgety, paying just $1.30, as she eyes up the NSW Oaks.

Kiwis excelling across the Tasman

Last season’s Chariots Of Fire runner-up Zeuss Bromac looks set for a good campaign. The former Kiwi son of Bettors Delight found the front and clocked a brilliant 1min 54.5sec mile rate at Menangle at the weekend. It was an all-Kiwi finish with Zeuss Bromac beating his stablemate and former classy Kiwi pacer Bad To The Bone by 6.3m. Paul and Gavin Fitzpatrick made it a race-to-race double when they scored with another recent Kiwi addition, Be My Rose, in a 1min 52.7sec mile. Be My Rose, bred and still raced by Barry and Katrina Purdon, has looked terrific winning all three runs since coming across from NZ at the start of January.

Just over a month into 2022 and the Telfer-trained Alta Wiseguy is the top stakes-earner in this country, after winning two Group Threes, at Omakau and the Invercargill Cup. His winnings of $33,000 put him ahead of the second-placed Bolt For Brilliance ($31,750). Only three horses have won three times this year and they are all trotters – Galway Girl, Laurie’s Legacy and Idle Stuartia.

Top trotters heading to the beach

A couple of quality trotters have turned up at Regan Todd’s Woodend barn. The arrival of Oscar Bonavena from the All Stars set-up has been well-documented but he has also picked up three-win trotter Gaz Man from Dylan Ferguson and Graeme Rogerson. The four-year-old gelding last raced in Auckland in November, when he finished fourth.

Online bidding registrations for NZB Standardbred’s 2022 National Yearling Sale held at Auckland and Christchurch are open. Buyers are encouraged to visit standardbred.bidonline.nzb.co.nz to register and verify their accounts 24 hours prior to the Sale, which begins at 12PM on Sunday 13 February at Karaka, before moving to Christchurch (Feb 14-16). More than 400 yearlings will go under the hammer.