Turnover on harness racing meetings in this country topped $5m last week, an increase of nearly a million dollars on the same time last year. Of the six meetings Sunday’s on the grass at Rangiora was the most popular with punters, turning over $1,501,381. That’s the biggest turnover of a meeting in New Zealand since Show Day.

The Kiwi connection has had early success at the prestigious Dan Patch harness racing awards in North America. Niki Hill, trained by Chris Ryder and driven by fellow ex-pat Kiwi Dexter Dunn, was named 2YO pacing filly of the year after recording nine wins and a second from 10 starts. Another expat Brett Pelling was also a winner, he trains older pacer of the year Allyway Hanover. The first batch of awards are a precursor to the awards ceremony in Florida on February 20, where Dunn is up for his third Driver of the Year title in a row.

Dunns getting it done

The new training partnership of Robert and Jenna Dunn is on the brink of a milestone already. After getting their first winner in early August they now 48 together from 262 starts and an impressive UDR of .2918. Their stakes earnings are also poised to go past $1m. Robert Dunn was the leading trainer for the past two seasons, before going into partnership with his daughter-in-law Jenna from August 1.

Harness Racing New Zealand's Blue September campaign raised $21,400.39. Ten drivers were involved in the Prostate Cancer fund-raiser campaign. It's the first time harness racing's been involved and was generously supported by many clubs and sponsors. 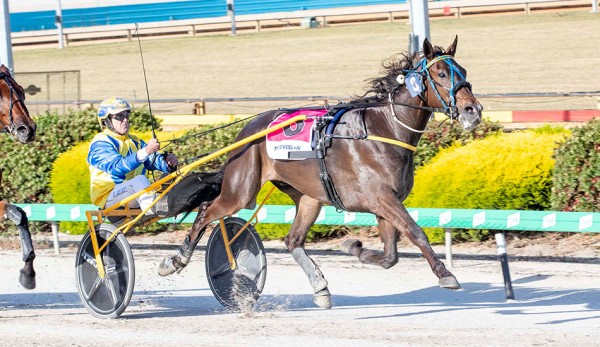 Runner-up to Five Wise Men in the 3YO Ruby at June’s Harness Jewels at Cambridge, Mufasa Metro has now won three of his starts in Australia. In his eighth start since moving to John Justice’s stable, Mufasa Metro won at Cranbourne on Saturday night. In the process he beat fellow ex-Kiwis Missucci and Swiss Miss. He'll now have a well earned spell.

In his first race since transferring from Kevin Chapman in North Canterbury, Glenthorne made quite the statement at Cambridge last Thursday, winning in 2:39.2 for the 2200 metres. The five-year-old Sir Lincoln gelding started a hot favourite and delivered for new trainer Arna Donnelly and Alicia Harrison by more than four lengths. The same combo won the previous race too with New York Minute, though it was in a slower time of 2:43.2.

New Life After Racing for Tosti

Harness Racing New Zealand’s HERO programme has a new star recruit, 2018 New Zealand Cup winner Thefixer. The winner of more than a million dollars Tosti, as he’s known, was retired in September this year and will be re-educated by HERO educator Tarryn Jones.

It’s a big night at Melton tonight with loads of stars and some strong Kiwi connections in action. Nathan Purdon’s star former Kiwi mare Spellbound is a hot favourite to win her Vicbred semi final, with the race to go at 1.05am. Purdon’s other Vicbred big gun Amore Vita steps out a lot earlier. She will be one of the favourites in her 2YO Fillies semi, which is race one on the card at 7.35pm NZ time.

It is a day for the Tradies at the Winton Harness Racing Club Christmas Eve meeting at Central Southland Raceway in Winton this Friday. The club is inviting tradies to have their own Christmas event At The Races event by bringing the BBQ and enjoying an afternoon of entertaining racing with their mates to celebrate the end of the working year. The first race is timed to start at 12.30pm and entry is free. Vaccination passports are required to enter the event.