Classy showing from "The Ego" 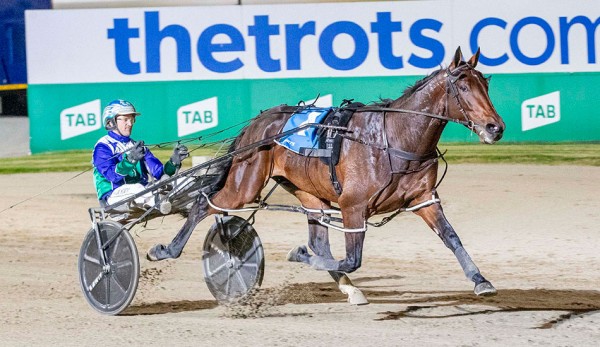 He's the most exciting pacer in Australia.

And by the end of the year Expensive Ego could be the best as well.

The still slightly goofy four-year-old continued his stunning rapid rise to the top when toyed with his rivals in the $210,000 Group 1 Australian Gold final at Melton on Saturday night.

It was redemption, having returned to Melton where everything went wrong for him in the Group 1 4YO Bonanza in late January.

But that seems a long time ago with Expensive Ego since scoring a monstrous Chariots Of Fire win, running a fantastic second in the Miracle Mile and now coasting to his Aussie Gold triumph.

“We weren’t here to break records or run times, just get the job done and he did it easily,” driver Luke McCarthy said.

Expensive Ego worked his way to the front and coasted to a 9.5m win over Pacifico Dream and Mach Dan in a 1min52.1sec mile rate for 1720m.

“He’s still getting better this horse. He’s learning and is becoming a pleasure to drive,” McCarthy said.

Now he gets a little freshen-up before heading to Queensland for a clash with Kiwi superstars Copy That and Krug in the new $250,000 Group 1 The Rising Sun at Albion Park.

“He’s got it all. He’s so strong, but he come off a sit as well. You saw what he did in the Miracle Mile,” McCarthy said.

“If stays sound, he could be the next horse to be scared of.”

Expensive Ego headlined a big night for Luke and Belinda McCarthy, who also welcomed high-class veteran Alta Orlando back into the winner’s circle at Menangle.

Alta Orlando, driven by Jack Callaghan, led then took a sit on the classy Ignatius before coming off his back then holding off in-form mare Rubies For Tash to win in a blazing 1min53.6sec mile rate for 2300m.

Team McCarthy went close to winning with another of their former classy Kiwi pacers when Star Galleria ran a mighty second in the Golden Reign free-for-all at Melton behind Victoria’s buzz pacer General Dodge.

Star Galleria did all the work outside the leader, hit the front on straightening and was only nabbed late by General Dodge, who trailed the leader and used the sprint lane.