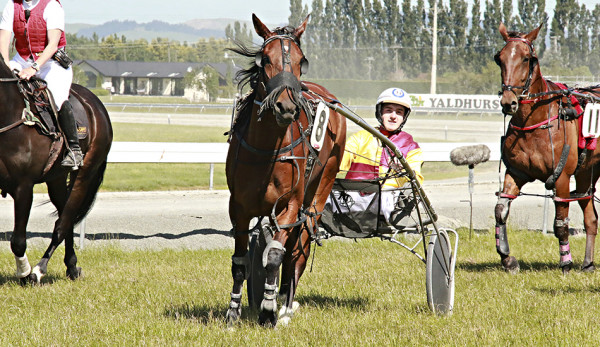 Junior driver Tom Nally pulled off one of the upsets of the century when Indulgence won at the unthinkable price of $140 at Winton on Thursday.

Nally sat the rank outsider off a hot speed and she unwound down the outer to like a $2 favourite for her knockout win in race 5.

While punters were left reeling by the result, Nally had a smile from ear to ear.

“It is amazing to win with a $140 shot, you don’t hear about that happening very often,” the reinsman said.

That price represents the second-highest dividend paid out by the TAB since 2004.

Only Northview Gambler, who scored at $165 at Addington in 2015, has produced a bigger return in a harness race in the past 16 years.

But, he showed the poise of a seasoned pro with his patient tactics.

Sitting off race 3’s strong pace, Nally saved all of the energy he could before asking Indulgence for her supreme effort.

“We went back off the gate early, it was a hot pace up front, so we were just waiting.”

“When Tetrick got going I followed him hoping to get past a few tiring runners.”

“We came into it well and then I hooked her out five-wide and she was too good in the end.”

Nally admitted Indulgence did not quite feel like a $2 favourite in the running.

But he thought he was on a horse at a fraction of her $140 price as she tracked into the finish before the turn.

“She felt good the whole way, she was on the bit.”

Indulgence has been at Nally’s side through much of his harness racing career.

The junior driver and his grandfather, Vin, broke the mare in more than three years ago.

Nally went on to work for her trainer Hamish Hunter, before driving his first winner in his colours with I’m Watching You in September.

The reinsman won that race in exactly the same circumstances as Thursday’s victory, coming with a perfectly time run from the rear of the field.

Indulgence was clearly unpopular with punters, much like she has been when her cantankerous nature has put her at odds with those working with her.

The mare has had a habit of lashing out with her back legs and started her path to the races unceremoniously, when kicking her driver out in her first workout.

Her massive win price may have handed punters the same kind of feeling when most missed out on backing her on Thursday.