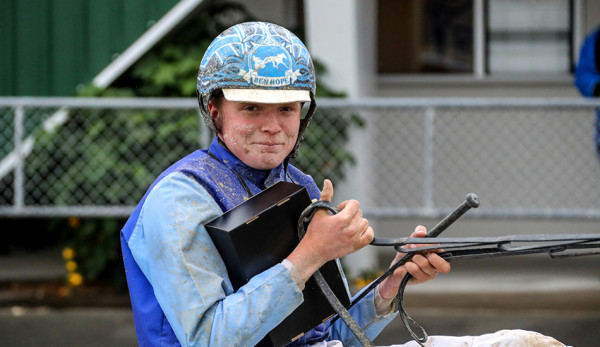 Junior driver Ben Hope delivered a tribute to his late grandfather Peter with his winning treble at Rangiora on Wednesday.

Hope combined with his mother and father, Greg and Nina, for his three driving wins the day after his grandfather was laid to rest in Blenheim.

Scoring his first winning treble in the sulky was a fitting nod to the 89-year-old, who had been one of his biggest supporters.

“We drove home today [Wednesday] from Blenheim because the funeral was up there yesterday,” Hope said.

“And it was good to get those wins as a bit of a tribute to him.”

“He has been a huge supporter of mine, him and my nana, Mary.”

Peter Hope trained 46 winners in a 30 year span as a licence holder.

Many of those victories came with his son, Greg, in the sulky.

Father and son combined to win the group 2 N Z Metropolitan Three-Year-Old Championship in 1982 with Braedoon.

Hope passed away last Friday, coinciding with Show Day at Addington, the scene of some of Robalan’s crowning achievements.

The champion pacer, who Hope raced with his trainer-driver Denis Nyhan and another fellow trainer, the late Allan Devery, won the New Zealand Free-For-All three times.

The Hopes capped a great day when Southernly Change ran second to Krystal Delight to fill a stable quinella.

Baxter was a brilliantly consistent performer through much of last season, but that form had dropped away recently.

A change in his work and dropping into a winnable race meant the five-year-old bounced back on Wednesday.

“He is a horse that has been disappointing lately,” Hope said.

“He would try pretty hard and he would be in the money most of his starts and he had a great wee record.”

“For a while there he hadn’t been going that good and he didn’t seem to be trying that hard.”

“So, we changed his work up and we were pretty confident he would go a pretty good race in that field.”

Hope handed a Krystal Delight a perfect run in the trail and she relished running along a rain-soaked passing lane to win.

“It worked out really well, getting the trail behind a nice horse.”

“I think she probably appreciated the wet track, her best form has been on the grass.”

“The rain taking a bit of the sting out of the track played a bit of a part, I think.”

“In saying that, we had been really happy with her training and we were expecting a good run in that field.”

Hope also gave Loyalist the same perfect trip and he broke through for a deserved maiden win.

“He had been knocking on the door for a while, but he kept running into one or two better.”

“But he got into the right field and get a good trip and he was too good.”