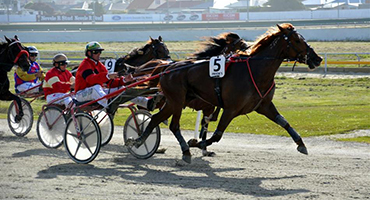 Bruce Negus has a sense of humour when it comes to his chances when racing gets underway later this month.

He will be forever linked with the great Courage Under Fire and his 24-race unbeaten streak in the late 1990s. But the Burnham-based trainer doesn’t have that sort of horse flesh at his disposal these days.

When racing resumes at Addington on May 29 he could have as many as six horses good to go, though he’s more confident with some than others.

“Glacier Coaster, Pat Campbell and Highland Reign are all going to be fit enough if we can trial first. They are all better chances in amateur races.”

He’s upbeat about six-win trotting mare She’s Allthe Craze : “She was unlucky premier night and will be ready as she requires little fast work.”’

But he’s not so bullish about two of his others.

Play By Ear has been unplaced in all seven starts, while Loissonya has won once in 61 attempts.