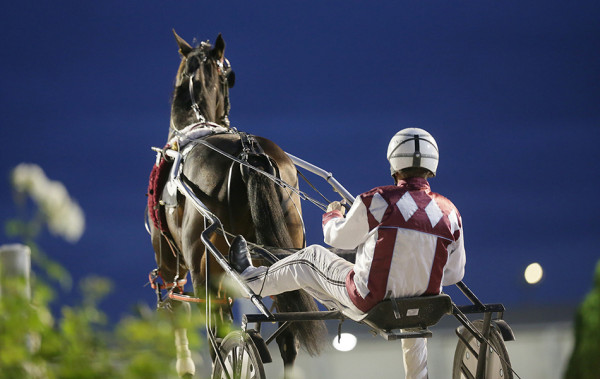 Tony Herlihy has never been involved in a group one like it and most of us have never seen one like it.

But Krug’s tearaway win in Friday night’s $200,000 Woodlands Northern Derby was a thing of raw power and beauty matched only by it shock value.

The fact the Dalgety-trained colt won the Derby was no surprise, after he was heavily backed in from $3.20 to $1.80 and the punters who took those odds would have been feeling pretty good after 200m as he strolled to the front.

But after a lap things started to go badly wrong as Krug got keener and keener, racing between 12-15 lengths clear with a lap to

go.
When a high class horse with our greatest ever driver aboard does that you think gear malfunction or he must be striking the sulky with his hind legs but Herlihy says that wasn’t the case.

“He just got very stirred up and the further we weren’t the worse he got. I realised after about 200m of trying to calm him down he wasn’t interested so I just went with him,” said The Iceman.

“Usually when something like that happens they can’t hold on and win but Cran had him so fit and he did a huge job.

“I'm bloody glad he did because I would have looked silly otherwise. I can’t ever remember having that happen quite like that before.”

While horses who race that clear rarely hold on at the highest level it was obvious at the 400m the chasers weren’t chasing fast enough and it was Luke John who closed the gap to three and a half lengths with American Dealer his usual brave third.

But all anybody could talk about was Krug’s tactics and the drama of the win, which firmly cements him back at the leader of the three-year-old pack, especially after the early favourite for Fridays classic It’s All About Faith dropped out to run last.

He will head back to Addington to try and add another Derby, with Ragazzo Mach and a few others waiting to join the fight but with Krug pacing 3:18 for the 2700m mobile, the sixth fastest in Derby history doing so much wrong, he deserves to be favourite for the NZ Derby as well.

Not quite so dramatic was Copy That’s win in the Co-Op Taxis City of Auckland Free-For-All as he worked to the front, albeit it in a quick opening 600m, and was never challenged after, holding out a huge late run from Kango.

The winner now heads to the Easter Cup meeting while Kango and third-placed Christianshavtime have done enough to suggest they can be open class forces next season as the north looks to replenish those stocks.

The other shock of the feature races came in the Greenlane Trotting Cup where Temporale finally got one over Bolt For Brilliance.

The race looked as good as over in the middle stages when the hot favourite worked to the lead but he was grabbed on the line by Temporale who sprinted magnificently from the one-one for a no excuses win considering he gave the winner a 10m start.

It was one of the biggest wins of young driver Tony Cameron’s career as Temporale downed his former stablemate, reminding us all what a wonderful trotting warrior he is for Michelle Wallis and Bernie Hackett.