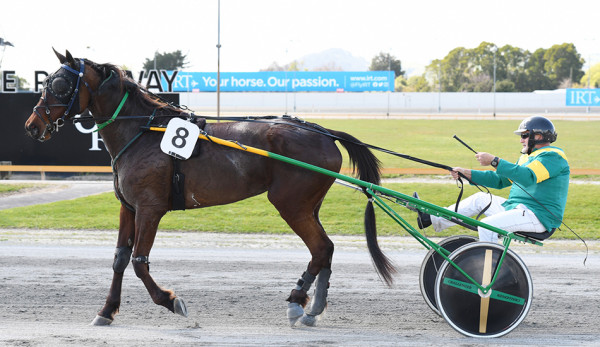 The Thames harness racing community may be small, but they were going off on Sunday after The Last Gamble’s win in the White Star Stables Mobile Trot (2200m) at Cambridge Raceway.

The Dale Moore-trained and driven mare is one of only three horses trained at the Thames Raceway and Moore was delighted to get another win representing the Coromandel township.

“I have got her and a young unqualified trotter called Mont Blanc who is just about ready to go to the workouts,” he said.

“Rachel Holmes is training one there, so there are only three horses trained out of Thames.

“We are a small but friendly community.”

The Last Gamble had been filling the minor placings this preparation and Moore believed the mobile start would be a major influence in Sunday’s result.

“She has been knocking around, she’s just got a bit of a chink in her armour when it comes to those standing starts and she has lost so much ground in those races by not going away and yet she has still been weighing in.

“The chance to run in a mobile was great, we have just been waiting for one of them.”

Moore pushed the go button off the mobile, asking his charge to push forward early from her outside draw.

While he attained the lead off race favourite Splitting Image, Dale soon handed up to Littlebitoflove to sit in the trail.

The pair improved off the markers turning for home and ran away to a three-quarter length victory over Splitting Image, with a further 1-1/4 lengths back to Peannie in third.

“I figured she would be tough enough if I had to use her a bit early. That was the plan to get her up there,” Moore said.

“I knew that horse of Dylan’s (Ferguson, driver), Splitting Image, would be the one I would have to get around and when I got around her I thought I have got this cut and dried.

“But then Jay (Abernethy, trainer-driver) comes and challenges and I had a little bit of a run with him, but he had the stick out and I thought I would ease and take a bit of a gamble and stay in behind him.

“Luckily I was able to follow through and got the gap and ran up the straight. It all worked out perfectly.

“We are just thrilled today.”

Moore said he enjoys heading to Cambridge Raceway with his small team, but he hasn’t ruled out a trip to Alexandra Park for some mobile starts.

“Coming to Cambridge is so easy, there is no traffic, and you can work on 1 hour 20 minutes to get here,” he said.

“It is a lot more relaxed than heading to Auckland, although I have been waiting for Auckland to run some more mile mobiles.”