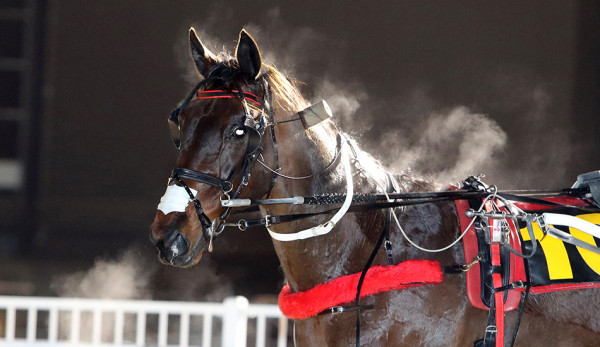 Missing a plane to North America continued to pay dividends for Classie Brigade as he continued his brilliant run in to the New Zealand Cup by winning yesterday’s Hannon Memorial.

The Robert Dunn trained pacer made it back to back wins in New Zealand Cup lead up races by powering away from placegetters Robyns Playboy and Tango Tara to win the group 3 Oamaru feature.

While question marks hang over the campaigns of several of the leading contenders for the New Zealand’s biggest harness race, Classie Brigade sits alongside North Island hope Copy That as one of the most in form horses amongst the contenders for the 3200m event.

Classie Brigade has landed in that prime position just weeks after he should have been touching down in North America.

Thankfully for the trio of owners, their 8yr-old never got the necessary tick needed to step on the flight he was booked on to.

“We have actually sold this horse three times, but we have still got him,” owner Grant Eynon said.

“He never quite gets there, but now I am very pleased we haven’t.”

“It was during lockdown – he was meant to be going to the [United] States.”

Classie Brigade produced one of his customary safe beginnings in yesterday’s feature as U May Cullect, drawn to his inside, went away in a wild gallop.

Though he did not shoot straight to the lead as he has in nearly all of his races this season, Classie Brigade took the front off eventual runner-up Robyns Playboy shortly after the start.

The 2020 edition of the Hannon Memorial was effectively over at that point as driver John Dunn controlled the event, before Classie Brigade unleashed a scintillating 54sec last 800m to win.

The kind of trouble-free run their horse enjoyed yesterday is exactly what the 8yr-old’s owners are hoping he gets in the New Zealand Cup, following Classie Brigade’s effort to flash in to third after being held up in the home straight in Cruz Bromac’s win in last year’s edition.

“He had to come around them with a horse stopping in front of them – he hasn’t had a lot of luck – but he has won his share,” Grant Eynon said.

A group 1 win is just about all that is missing from the four-time group 1 placegetter’s resume.

A New Zealand Cup win be a perfect way to bring it up, according to the horse’s owners.

“It would be great if he could top it off and win the cup, that would be fantastic,” Eynon said.
“He has gone close, but he kept on running in to that horse called Lazarus.”

“If he keeps his standing start manners and keeps rattling home fast last quarters [400m] he will be a hard horse to beat.”

Tango Tara was solid in third, ahead of A G’s White Socks, who was forced to sit parked for the final lap of yesterday’s feature.

Though U May Cullect ran last of seven runners and made a poor beginning, the popular pacer looked to have improved from the very slow start he made to his season at Winton last week.