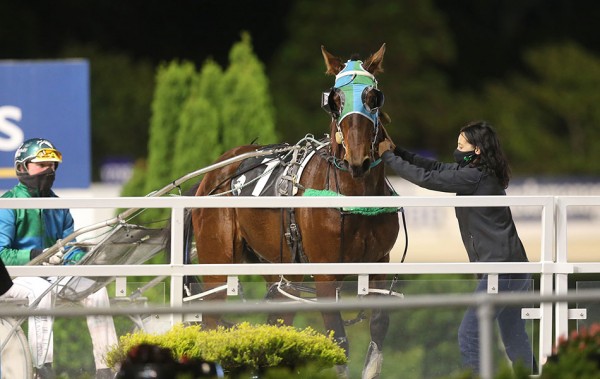 As fitting farewells go this was right up there.

Last night at Alexandra Park Josh Dickie saluted the judge with his very last drive before heading over to Australia tomorrow morning.

And it was a close run thing with Getn Wiggy Withit just lasting in Race 8 to win by a nose from Ruby Mach.

"I thought I'd actually got beat," says Dickie, "she ran past me but to my horse's credit he fought hard."

"It's nice to win any race but it was great to bow out like that."

Dickie is widely regarded as one of the north's most accomplished drivers, with 450 wins. His absence will be keenly felt.

Tomorrow morning Dickie and partner Sammy Kilgour head to Victoria for their new life. Dickie will be a freelance driver, based at a 50 acre (20 hectare) property owned by Kilgour at Melton.

"It will take a while to get going though we will have seven horses to start with......I know I'm going to have to do some travel but I'm prepared for that."

His first drive is expected to be at Maryborough next Thursday in the Breeders Crown series with trotter High On Love, who finished eighth in the Group One Redwood Classic a fortnight ago.

It's been a bit stop start for the 30 year-old in recent weeks with Covid restrictions and other factors making travel plans difficult. There's also the usual challenges with moving country and getting everything organised - "it's been stressful at times, certainly not easy."

Dickie has no idea when he'll get back, and leaves with some mixed feelings, but excited about what lies ahead.

"It's always sad leaving home but it's a new opportunity .. and why not give it a crack."