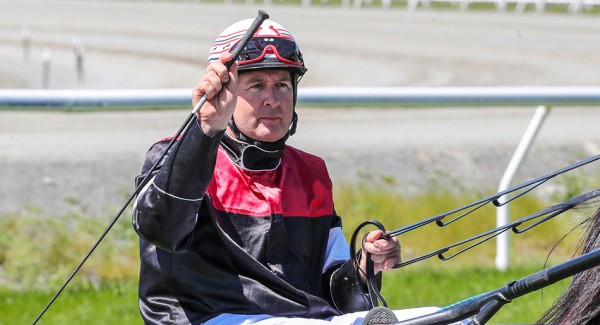 If races were won on looks alone Brent Borcoskie would be a lot more confident about Moment of Kaos' chances at Rangiora today.

Standing at around 17 hands the gelding is widely regarded as the biggest standardbred racing anywhere in the country.

"He looks a million dollars," says trainer Brent Borcoskie, who will also drive Moment Of Kaos for the first time in race 7, the Sundees Son Dominion Trot Winner Trot (6.22pm).

So a month or so back he went from Negus' Burnham stables to Borcoskie at Ashworths Beach in North Canterbury.

"He likes the beach," says Borcoskie, "but he's hitchy in his gait, it's not as fluent as you'd like."

"I'm more hopeful than confident," he says of his chances today, "he was just ok at the trials...and the races are just down the road."

"He could have some issues or it could be just his size .. he's a big horse, when you sit behind him you can't see anything!"

Borcoskie has no option but to be patient, hoping Moment Of Kaos can regain the form that saw him win on Forbury Park's final night on July 8, and at Addington a month earlier.

Moment Of Kaos' last race was a 12th at the Methven Trotting Club's meeting at Ashburton in September.

Coincidentally Borcoskie was driving in the same race, finishing third with his trotter Smudgee.

He has eight horses in work at the moment. On Labour Day (October 25) he drove a double at Ashburton with The Bloss and Full Of Desire.

Today the race is named after the biggest trotting star of them all, Sundees Son, following his record-breaking win for driver John Dunn in the Renwick Farms Dominion.

"He was outstanding wasn't he?" said Borcoskie, "he just went to war with them a long way out, in those two mile races he just outstays them."

Today Dunn has six drives on the eight race programme including Shiffty for trainer Gavin Smith in Moment Of Kaos' race.

But Borcoskie is looking more to the Ian Cameron trained and driven Bright Glow.

The seven-year-old mare is the veteran of 126 starts, with her last win (her eighth) coming on May 23, at Rangiora.