Hot And Treacherous looms as a contender for The Race

Champion driver Maurice McKendry says Hot And Treacherous wouldn’t be out of place in the $900,000 The Race as competition for slots starts to heat up.

It was his ninth career win from 25 starts and capped a good run of form that has seen him close up behind Self Assured (who has a slot) and Krug (who looks certain to have one soon) in recent races.

Most of the slot holders for the new feature to be held at Cambridge on April 14 are keeping their cards close to their chest until after the Miracle Mile carnival wraps up next Saturday and the intentions of the connections of the leading Aussies becomes more evident.

But as a horse who produced one of the runs of Jewels day last season, Hot And Treacherous would seem to slot (excuse the pun) into the race well.

“I think he would fit right in,” says McKendry, his regular driver who has also recently won on The Race favourite Self Assured.

“He just keeps on getting better and I think he will be even better in six months or another year.

“But he is up them now and if he drew well he could give it a shake.” 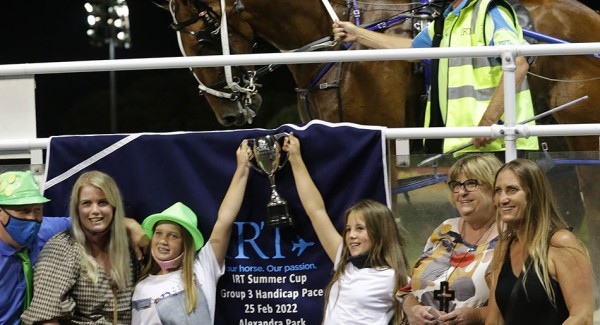 With two slots in The Race officially gone and three others likely to have been gone it looks like five are left, with at least two leading Australian horses in play.

It also looks increasingly unlikely trainer Mark Purdon wants to head that way with either Akuta or Franco Indie, although that could change after the Northern Derby, but more and more h like Hot And Treacherous and B D Joe as well as Laver will be coming up on slot holder’s short lists.

One horse likely to be in The Race is South Coast Arden, with his connections having a slot, and while beaten as favourite on Friday he was a mammoth fourth after being checked early and will have lost few fans as he heads to another showdown with Self Assured at Alexandra Park this coming Friday.

His trainer-driver Brent Mangos had no such concerns with catch drive Beach Ball who destroyed his opposition in a strong lower grade pacer.

The Kevin Chapman-trained three-year-old put a remarkable 13 and a half lengths on his rivals, rolling to the lead and getting further and further in front with every stride from the 600m mark.

He wasn’t the only southern winner as Gold Chain captured the $30,000 Fiskin and Son Northern Breeders Trotting Stakes for trainer Bob Butt and driver Matty White.

The daughter of Muscle Hill had to be good too as she overcame a 30m handicap for the second time in a fortnight to win a group three trot in the north, with Butt’s decision to send her north proving a masterstroke.