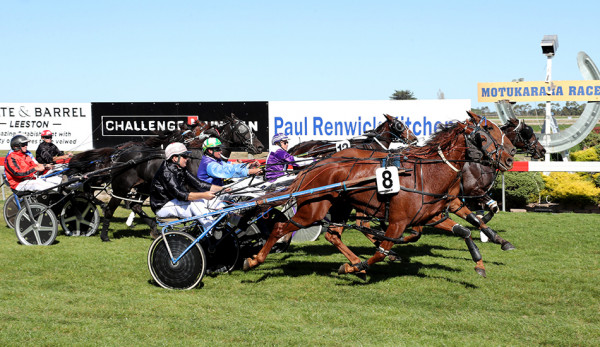 It was a long time between drinks for Peter Holmes but he was able to quench his thirst at Motukarara Raceway on Monday when securing his first win since 2014.

Holmes contested the Crate & Barrel Leeston Mobile Pace (2000m) with Beeps and Evidently, and the former was able to get up for the Templeton trainer by half a head over Cristiano Buccini.

Holmes was duly delighted with the result, but said it came as a pleasant surprise given Beeps was fresh-up after undergoing treatment for stomach ulcers.

“It was great, it’s been a long time between drinks,” Holmes said.

“He went quite good races on the coast and up at Blenheim, but we had a bit of trouble with him, he wasn’t eating.

“We found out that he had stomach ulcers, so we treated him for that and he has been eating up really well ever since.

“He has always gone better when he has had a race under his belt. I thought he would probably need the run today, but he proved us wrong.”

Holmes was also pleased with the seventh-placed run of stablemate Evidently.

“He didn’t go too bad, I was quite happy with him,” he said. “He is no champion, but he went quite a good race today.”

Holmes has enjoyed training for more than three decades and he said he enjoys training a couple of horses, which gives him a break from running his Canterbury sheep farm.

He has trained since 1988 but said the best horse he has been associated with was seven-time winner Regal Nugent, who was trained in his mother Maureen’s name before Holmes took out his license.

“She was a really nice mare,” Holmes said. “She won seven, and in those days there was no drop back or penalty free wins. She was a lovely mare and the best one that I have been associated with.”

While pleased with Monday’s win, Holmes is looking forward to the future with a couple of his younger stock.

“We have got a couple of Terror To Love two-year-olds that go around alright,” he said.

“A cobber of mine, Grant Inglis, who works for New Zealand Bloodstock, he and I bought a trotting yearling at the sales, which I have broken in and is going alright too.