Grins get around The Race 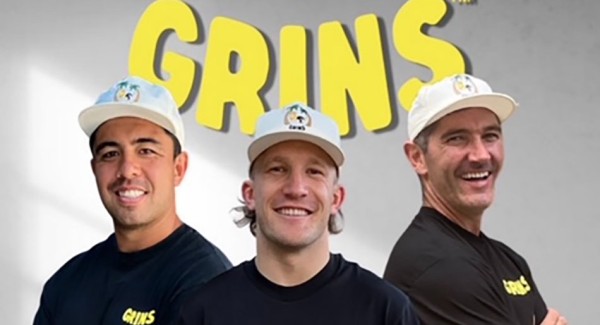 Grins, the Ready To Drink alcoholic beverage created by All Black legend Stephen Donald and current All Blacks Anton Lienert-Brown and Damian McKenzie, is the naming rights sponsor of The Race.

The Race by Grins, at Cambridge Raceway on Thursday April 14, is the first harness racing slot race in Australasia and New Zealand’s richest standardbred race with a stake of $900,000.

“We’ve signed up for three years and we’re going to be with Cambridge Raceway every step of the way,” Stephen Donald said.

“The concept of The Race is unique with people bidding for slots and then going about finding the best horses they can to fill their slots so that’s cool and talking to Dave and the crew from Cambridge Raceway about where they want to take it and the kind of event they want to make it was the exciting part to be honest.

“I knew the guys when they were all playing for Waikato,” he said. “We needed a naming rights sponsor for The Race and Grins is a fresh new brand that works well with The Race and hopefully it will help to attract a new crowd to Cambridge Raceway.”

Donald said he is looking forward to attending The Race meeting which takes place on the Thursday before Good Friday.

“Absolutely as long as there’s no restrictions on us getting there we’ll be in attendance,” he said. “Hopefully Anton will be able to be there too depending on what bubbles there are at the time. We’re excited about a great night out.”

The first event of its kind in New Zealand, The Race by Grins will be supported by eight additional races with electronic R&B duo Jupiter Project bringing a party atmosphere between races.

Donald played it safe when asked for a tip for The Race by Grins, backing his employer SENZ’s charge Self Assured.

“SENZ have a slot and since they’re my employers, Self Assured is my pick but obviously there’s talk of a few Australians coming over so it’s going to be an exciting night and a pretty special event in Cambridge and one that we hope just grows and grows and as the world opens up who knows where it could end up,” he said.

Limited tickets are currently available for The Race by Grins at www.therace.nz, with more tickets to be released at 9am on Friday, following today’s announcement of changes to the Covid-19 Protection Framework (traffic light) settings.