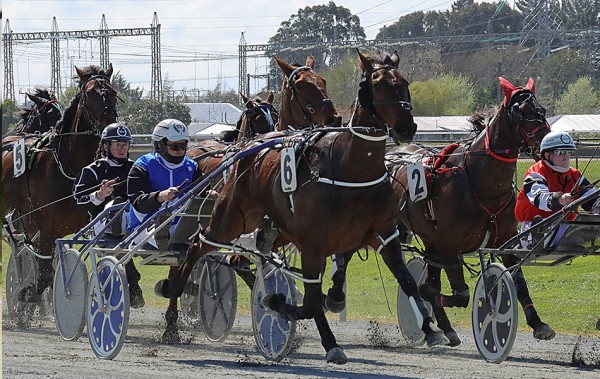 Nathan Williamson continued to pay back owner Dayle Kinzett for his babysitting duties two decades ago with the win of Get Up N Dance at Ascot Park on Saturday.

The pacer sealed a hat-trick of wins for Kinzett and his wife Kay after justifying his favouritism for race 2.

Williamson and Kinzett have developed a strong combination with the trainer having prepared two horses for the breeder-owner in Get Up N Dance and half-sister Shut Up N Dance.

The latter was brilliant in winning her only two starts in a career ended by injury after Williamson recommended she transfer to Regan Todd’s Woodend Beach stable.

Williamson and Kinzett’s successful association goes well beyond harness racing and started back when the trainer was literally just a boy.

“We go back a fair way, I used to babysit Nathan,” Kinzett said.

“I grew up in Oamaru, Phil boarded with us when I was just a young fella, we shared a room.”

“Probably the only tale you could print is that anything he tells you about his fishing expeditions is a lie.”

Kinzett and his wife have a 100% strike rate as breeders with Get Up N Dance and Shut Up N Dance the first two horses they have bred.

“Shut Up N Dance is the first one we have bred and raced, but I had raced horses before.”

“We have only had to two to the races and we have got a yearling at Nathan’s.”

“He’s a full brother to Shut Up N Dance and he is coming up quite nicely.”

Shut Up N Dance is just a matter of days away from entering the breeding shed for the first time.

“She is at Nevele R (Stud) and I am going to see her next week.”

“She is booked into American Ideal.”

Get Up N Dance’s hat-trick came after he produced two wins at Addington during the winter.

The pacer will head back up the road soon in an effort to qualify for the Show Day Futurity Final.

“He is paid up for the futurity on Show Day.”

“His second win at the beginning of August counted, but his first one didn’t so he will be going to Addington next week.”

Matthew Williamson produced Wolfenstein to win race 10 in his own colours.

Sporty Charlie undoubtedly produced the performance of the day on Saturday’s card when taking out race 6.

The two-year-old showed real class when sitting parked from the 1300m and reeling off fast closing sectionals to tough out an impressive victory for trainer Brad Morris and driver Brent Barclay.