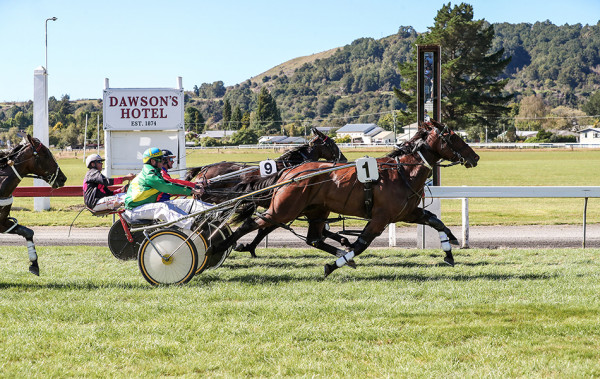 Trainer Steven McRae’s team had a near perfect trip to West Coast this weekend, culminating in a winning double at Reefton on Sunday.

Gayle Force was a beaten by a mere neck in the Kawatiri Cup (2600m) on Friday, but he was not to be outdone on Sunday when winning the Recreation Hotel Inangahua-Grey Valley Cup (2500m).

The four-year-old gelding stepped away well from his front mark for driver Craig Thornley and took an early trail behind Queenofdance.

Gayle Force got the plum trip throughout before Thornley asked him to chase down Queenofdance in the home straight.

The son of Bettor’s Delight required every inch of the straight to wear down his rival, but nabbed him on the line to win by a half head, with a further three-quarters of a length back to Longview Lady in third.

McRae was pleased with Gayle Force’s efforts on Friday and was delighted he was able to go one better two days later.

“I thought he was a chance to win on Friday and may just have come to the end of it,” he said.

“I was pretty happy with him. I thought he would be hard to beat with a run like that today and he only just got there.

“He has been a good, consistent horse the whole way through and he is not often out of the money.

“It’s a bit harder now that he is up in grade a bit, but I will probably give him a spell now and hopefully he comes back a bit stronger.”

The four-year-old mare won by half a length at Westport on Friday, but blew her rivals out of the water on Sunday when running away to a 10-1/2 length win.

While pleased with her impressive run of form, McRae said her raceday success has come as a bit of a surprise.

“It has been a bit of a pleasant surprise,” he said. “She (driver Gemma Thornley) gave her a good trip, but I didn’t picture her winning like that.

“She has never really showed us a lot at home or even at the trials. She has just been okay, but she seems to get the bit between her teeth on race day and she knows what to do.”