First wins for both horse and trainer

Zane Gregg's first ever win as a trainer was, as he puts it, "a bit of a surprise".

Paying $23.80, Renko capitalised on a perfect trip to win on debut at Ashburton yesterday in the Rosebank Life Care Harness 7000 Mobile Pace (1700m). Drawing one Craig Thornley was straight into the trail behind the pace-setting Taliesin, then zipped up the passing lane to beat Watch Me by a neck.

"It was a bit out of the blue, I hadn't nominated him but they kept nominations open so we put him in," said Gregg, "and it was nice to get the win, it's two years of work for five minutes of glory." 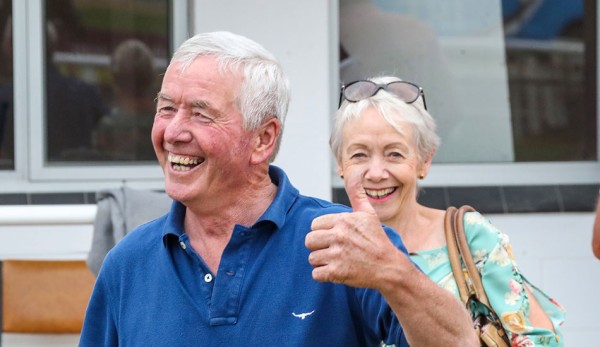 The Gold Ace four-year old was co-bred and is co-owned by Gregg and his sister and brother-in-law Dawn and Gill Harris. All three were at Ashburton to enjoy the moment.

As for Gregg himself he says he "wasn't too bothered" at the fact that before yesterday he hadn't trained a winner in 18 years and 32 starts.

"I hadn't thought about too much.. I'd had a few placings along the way but it was nice to get a bit of a result."

To many Gregg's colours might look very familiar. The green with gold crossed sashes are the same as used by "The Maestro" and 18-time New Zealand champion driver Maurice Holmes.

In the late 1970s - early 80s Gregg had seven wins as a junior driver, including one with the Maurice Holmes-trained Orfeo in 1979.

He later sought the permission of the Holmes family to use the famous colours, and has used only them since he started out training in 2004.

As well as being a trainer Gregg is the farm manager at Spreydon Lodge where he's worked since 1986 and has bred more than 20 foals over the years.

"I have four mares in foal this year".

Among some of the good horses he's been associated with are New Revenue, who won six from 30, Franco Elect (3 from 27 including the 1990 Group Three Timaru Nursery Stakes), and Cromac Johnny who had a win from three starts in this country for Tony Herlihy before winning 22 from 81 starts in Australia (2009-2012).

Gregg has always been a seller of horses and if the opportunitiy arises then he will do so again.

After all Renko is one from one and as Gregg puts it "he's clearly not nil and this is a good time to sell".