Dual code trainer Lyn Prendergast might be more familiar racing at Riccarton, but it was down the road at Addington Raceway where she tasting success on Sunday.

Prendergast trains just the one harness horse, Sonic Reign, and the seven-year-old gelding got up to record his second victory of the season in the Group 1 Placegetter “Nandolo & Didjabringthebeers” Handicap Pace (2600m).

Off the front row he missed away at the start but quickly regathered his hopples for driver Carter Dalegty. 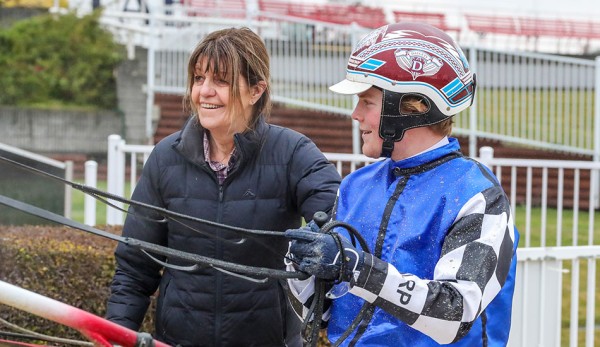 While Prendergast wasn’t overly enthused about Sonic Reign’s misdemeanor at the start, she said it proved to be a blessing in disguise, with the son of Mach Three getting the prefect trip in the one-one position.

He was able to hit the front down the home straight and hold off Loyalist to win by three quarters of a length.

“I was thrilled with him,” Prendergast said. “He missed away, but it was a bit of a blessing that he got back there.

“It was the perfect drive by Carter. He got a drag up all the way and everything went right.”

Prendergast was pleased with her charge heading into the race, saying he had benefitted from his two previous unplaced runs.

“I was happy with him heading into today,” she said.

“He had a second (last month) and then I gave him five days off. He was a bit fresh going into his next start and over-raced a bit.

“He only had a couple of days off this time and his fitness was a lot better.”

Prendergast is unsure what his next outing will be, but she is looking to keep racing over winter while Sonic Reign is in form.

“I have just got to have a look at the programme. I am pretty happy with the way he has come through it,” she said.

More noted for her exploits as a trainer in the thoroughbred industry, Prendergast said she enjoys the diversity harness racing offers.

“He is the only harness horse I have in work. It is a hobby for me,” she said.

“He gets treated like the thoroughbreds, he lives the life of Riley here.”