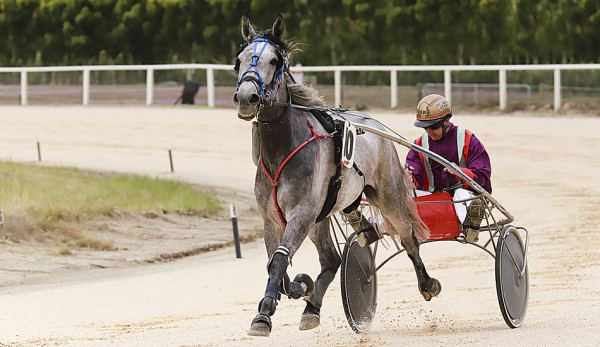 One of Forbury Park’s stalwarts enjoyed success just a day after the 60th anniversary of its first night meeting when Dem Bones Dem Bones trotted to victory on Wednesday.

There was no need for lights as the sun shone on the trotter trained by Ray Hanson as she strode to victory during one of the few daytime meetings the track has hosted over the past six decades.

Hanson was not on hand for the start of night racing at the Dunedin track but has been there for 50 years of its 60-year-run.

“I worked out that I have been training for 50 years.”

“I remember when they tested new lights before I started, I was in the fire service at the time.”

“It was just incredible the way they lit up the whole area.”

Hanson took out his training licence in 1980 and has racked up 31 wins working his horses at Forbury Park and at nearby Smaills Beach alongside friend and fellow Forbury Park Stalwart, the late Fergus Mathieson.

Exactly what number of victories the veteran horseman finishes his career on with be up to Dem Bones Dem Bones.

Hanson has decided the five-year-old will be the last horses he will continues to train.

With the way she has progressed recently and her victory on Wednesday the trainer’s tally looks set to edge higher into the thirties.

“She has been knocking, it has only been immaturity that has been stopping her,” Hanson said.

“We have just been waiting for the penny to drop.”

Dem Bones Dem Bones has taken a while to get her racing nous up to standard, often making slow beginnings before rushing home for a minor placing.

Hanson took the mare off the unruly two starts ago and was immediately lumped with a wide draw at Ascot Park before being handed a second row draw in Wednesday’s race.

The trainer had done his best to get the mare ready to win, so left it to driver Matthew Williamson to try to get Dem Bones Dem Bones into a handy spot.

“I said to Matty you are just going to have to sort that one out yourself,” Hanson said.

Williamson did exactly that and miraculously worked the mare into the trail with a lap to go when he was threatened with being left sitting parked.

“It was out of character, she is normally chasing from a long way back, but here she was sitting behind the leader with a lap to go,” Hanson said.

A lack of trials in the Dunedin region has not helped Dem Bones Dem Bones learn the racing game and Hanson believes it has cost her progressing further.

“I haven’t rushed her and if we weren’t so short of trials down here I think she would be a lot further forward.”

Hanson credited Williamson for his help in teaching the mare to get away faster and race more tractably in the field.

“I have been lucky with Matt’s father (Phil Williamson) not having many maidens at the moment I have been able to get him to drive her.”

“It has just been a natural progression, he is a very knowledgeable driver.”

“In fact, I rate him the best trotting driver there is.”

Williamson enjoyed a great run in the silky on Wednesday, winning four races.